I’ve been spending some time with a recent report from the Pew Internet & American Life project. For those not in the know, the Pew Research Center conducts and publishes social research; the Interet & American life project is just one  of their efforts.  Since Pew’s funding is  secure the work they do is methodologically sound, beautiful even–unlike

some of what gets reported in the business press. In fact, the execution is so close to perfect  it’s a pity so many Pew reports only warrant mention of a fact or two from the Executive Summary.

This past June Pew issued an 85-page report entitled Social networking sites and our lives. It ought to be required reading for every marketer using or considering using social networks as a marketing channel. I say that because the data we typically see comes from parties with vested interests. Rational businesspeople ought to remember that and discount what they read accordingly.

Let’s look at some charts, courtesy of Pew. Here’s the first:

Here’s the question: what’s happening with the males? We have preliminary 2010 Census data and that 3% drop represents 3.5 million people. That’s a lot to go missing. I understand the pie is bigger so the gross number is larger but the trend is the thing to watch.

Until this report came out I hadn’t noticed that, with the rare exception of social media colleagues and a few super-connectors, FB posts from my male friends had become sporadic at best. If you labor in a male-dominated market segment, as I do, that’s  notable.

In case you think I’m falling back on a sample of one, my experience is consistent with Pew ‘s data:

Maybe the males are someplace else. Let’s look for the sexes among the Social Networks:

Whew, there they are, over on LinkedIn. Holly Pavlika has been talking about Twitter moms  for a while and she’s been right. Pew cautions us: “None of the results we report should be interpreted as explanations of cause and effect” so I’ll resist the urge to hypothesize. I will note that when you consider each network’s brand essence and the demonstrated differences in communications preferences between the sexes, then the distribution seen above makes perfect sense.

Let’s mix things up. How about a table?

That’s a little scary. Pew reports that Facebook is the dominant social network and yet the proportion of white FB  users is almost 8% higher than whites in the population as a whole. Compare the above chart with  2010 census data and you’ll see that black and Hispanic populations are under-represented in social networks. Hispanics are missing across the board. MySpace appears to be more congenial for black users. 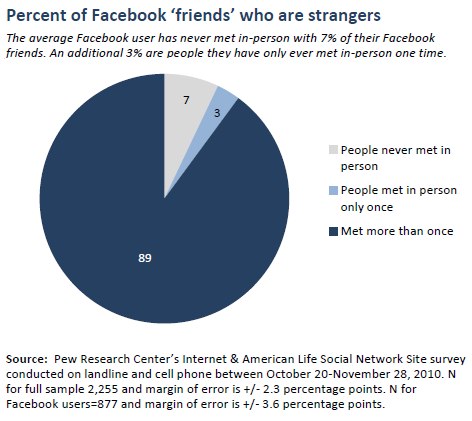 Too many strategies ignore this fact. I sat in focus groups in Houston and Philadelphia in early 2009 and heard dozens of 20- and-30-year olds say they wouldn’t connect with people they didn’t already know. The Pew data, drawn 18 months later, are consistent with those statements. Yet plans to more or less force connections continue to proliferate.

I can’t afford to adopt the flavor of the moment in media channels without considering the business impact.  Audiences matter because it’s people who respond. At best I’m agnostic on social networks as a response medium. This Pew study hasn’t given me reason to drop my skepticism.