As a response marketer, I’ve been up to my ears in numbers since I got into the business. Math has become so important to what I do  that I went back to school to ladle on more.

That’s why I’m particularly attuned to what people do with numbers. If you read my last post you know I don’t agree with Rio Longacre. Our philosophical and executional differences aside, his post provides a beautiful illustration of what happens when you take the easier way out with numbers.

I’m a big believer in stating one’s biases upfront. Here’s one: when speaking about data, or using data to support and frame an argument, one ought to follow the rules and common practice of speaking about numbers. You should also consider making the raw numbers and what you did to them available for scrutiny. Unfortunately,  Longacre  does neither.

Take, for example, the missing year.  I was trained that data presented in a series should be consecutive and continuous. Yet 1984 is missing. Maybe it’s there, tied up in the phrase “1983 or so.” Maybe stating it like that is just meant to illustrate a fresh, new way of looking at the world but it just strikes me as sloppy. Should any client or colleague trust a numbers-based argument that’s vague about what time period is included?

Maybe I’m missing the point. Let’s take a closer look at these generations. Here’s a chart from the Population Reference Bureau:

Pretty straightforward and something we’ve all seen before. Except that this is, as it almost always is,  demographic data. It’s the main reason I said I doubted any familiarity with Strauss & Howe’s work in  the last post.

Anyone who has spent any time with behavioral or attitudinal data and tried to make differences appear using the demographic data quickly gets into a bind. I’d be happy to write a post illustrating just that point using real data. If anyone is interested let me know by comment or email and I’ll do it.

Trouble arises because a generational cohort is about shared experience, not shared birth dates (although there’s obviously some overlap). In fact, Strauss and Howe use different years than Longacre (and most others) to define the generations and it shifts the numbers from what you commonly see. Take a look:

Yes, 1984 is missing because I’m not sure where Longacre would assign it (although the PRB has managed to find a home for it). But no matter which column I assign it to, the differences in size between the demographic generations and the attitudinal generations remain.

I created the next chart using an incomplete data series of live births: 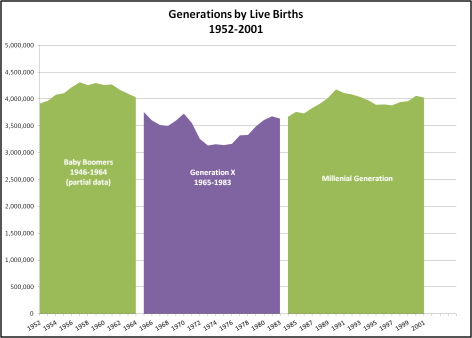 Why, you ask, do I go to the trouble of demonstrating the charts we regularly see can be recreated? The exercise serves two purposes. The first is to illustrate data verification.  For reference set data–basically the population–it’s important because your particular data needs to be compared to something.

The other reason I did this is to illustrate the dangers of complacency. Consider one more chart:

It looks just like the other two, right? I call your attention not just to the title, but also to the left axis.  What should be  immediately apparent is that the extreme low (below 3.5 million) seen in the birth chart is now closer to 4 million. In fact, it’s often above that.

Now why should that be?  The earlier charts  are based on birth data. But US population is not a closed system. People die–naturally and because of things that Generation X avoided, like war –and people emigrate  The result is  far more stability in cohort size than you would expect.

Look again at the table above. That’s 2010 census data representing the population that year. Using Longacre’s break points the cohorts are closer in size than boom/bust/echo should allow. The Strauss & Howe numbers vary more but that’s an artifact of period–the Strauss and Howe generations range from 17 to 22 years, Longacre’s are each 18.

What’s my point? I have more than one. The first is that the authority of numbers should always be checked. There were 16 million more Generation X members alive in the US in 2010 than the birth data indicate. That’s a sizeable amount and to miss them puts all your reference numbers at risk.

My second point is that reporting  numbers is not the same as understanding numbers–a point that should dovetail with the one just made. I started by saying math is important to what I do. Maybe it’s less important for other marketers, but if I’m off by more than a few tenths of a percent there’s revenue at risk.

Finally, back to Longacre’s main point about generational succession. The theory is about shared experience. Within Generation X, probable immigrants amount to the equivalent of  4 years of births. Their experience is most decidedly not the same as that of those born here. And to presume that it is to make an even bigger mistake than the ones already made.

By the way, here’s my data set (drawn form the Census Bureau) and my work so you can check it if you care to.