Between Meals: An Appetite for Paris
A.J. Liebling

I cook because I love to eat. And I learned to eat the not so hard way–I went to France. 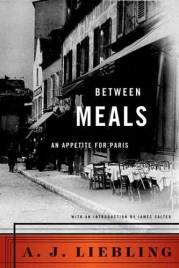 Not for an extended stay, of course. Who can afford that? No, I went armed with recommendations from friends and acquaintances.

And I read Liebling.

Abbot Joseph ‘Joe’ Liebling is one of those early-on writers from The New Yorker to whom I gravitate. (I am intentionally using ‘whom’ in protest against Megan Garber and the folks celebrating the demise of the word over on The Atlantic‘s site.)

A born and bred New Yorker, Liebling and I share a Long Island connection. His family spent summers in Far Rockaway and if I read the clues right they were as close as you can get to Nassau County without crossing the city line. Other than that, and besides the food thing, it’s a stretch since Liebling died before I’d celebrated two birthdays.

A journalist with regional newspapers before returning to Gotham and taking a desk on West 43rd Street, Liebling was an aficionado of things no longer enjoyed in polite society: con men, boxing and, to some extent, gluttony. Make no mistake about it, Joe was a trencherman beyond compare.  His appetites may even have done him in.

This slim volume is among the last work Liebling published between hard covers and it’s a memoir rather than an eater’s diary. In 1926 or so Liebling’s father offered him a year of study in Europe and he jumped at the chance to attend the Sorbonne and immerse himself in Paris. In the event, the university quickly took a back seat to wandering the city, eating his way from monthly stipend to monthly stipend.

Hemingway and the ex pat crowd were in Paris at the time but you’d never know it from this book. Liebling was too young to mix with those luminaries and confined himself to precincts less chic and less abusive of his wallet. He maintains that you need the constraints of limited  means to learn to make the choices that expand your palate.

This was a reread for me. The  first time I read it I was devouring information. Paris is certainly the European city I know best (and the truth is, I’ve set out for Europe four  times and wound up in Paris three of them) and so revisiting the book was a different experience. Even allowing for 6 or 7 decades between his experience and mine (plus a world war) you can recognize the things Liebling writes about if not eat the meals themselves.

This is food writing from a different era. There isn’t a lot of purple prose about fresh green vegetables done just so and there isn’t a recipe or suggestion of one in sight. There are organ meats,  of course,  and lesser fishes and pots simmering incessantly with the makings of the next meal. And there’s wine, lots of wine including an extended rationale for why Tavel is the only real rose´ and passages on Burgundy and Rhone wines that I think still hold true.

Liebling’s near-contemporary, Waverly Root is here, too,  although their paths did not cross until after the jazz age ended. Root is fairly well-known for writing about the food of France and he and Joe share a New England connection. Root hails from Providence, Rhode Island which is where Liebling had been toiling as a print journalist.

It’s France, of course, and a young man’s liberation, so there’s sex, more accurately the hint of it. I often think we gave up an awful lot when we allowed explicitness. Sometimes the suggestion is more powerful than the reality.

Throughout there are characters out of central casting: husband wife teams splitting the front and the back of the house between them. Landlords looking for the rent and celebrating its arrival with a toast. Young women in cloche hats in search of a free meal and some excitement in the City of Lights.

One thought on “Like Joe, I Love to Eat”