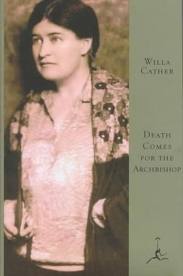 Heuristics is a word much beloved by professors.  I get that they need some language to set themselves apart, I just wish they could agree on what it means. So let me stipulate right now that I am using the ‘mental shortcut’ definition. And let me be even more clear, that pretty much means I make liberal use of pigeon holes.

Willa Cather‘s pigeon hole is labeled literature of the Great Plains. I’m pretty sure she’s the only occupant and I’m pretty sure that somewhere a Cather scholar lies waiting to disabuse me of that narrow notion. Perhaps that day will come but for now we have this gem, set in the high desert country of the American Southwest, about as far from the Plains as you can get.

It occurs to me that last sentence is flat-out wrong. Bobby Troup even laid out the directions from Chicago. Yet it’s also true. The Plains are an inland ocean, an undulating mass spreading in every direction. The Southwest is the moon, sere and populated with bizarre outcroppings, mountains lurking somewhere in the distance, ringing the space off from the rest of the continent, preserving it for John Ford. I suppose what they share is space; I’ve spent hours in both places without encountering another human being.

Cather herself admits that the impetus for writing the book came from spending an extended period of time in the Southwest around 1912. Check me on this but I’m pretty sure that’s around the time Arizona became a state, completing the Lower 48. The Modern Library edition of DCFTA includes a letter from Cather to the editor of Commonweal in which she lays out the origins of the tale.

What she says in that letter is that during her stay her fascination with the story of the mostly French missionaries who brought the Catholic church to the area grew. That should puzzle anyone with a sense of history since the area was long part of Mexico. In fact, Cather tells the story of what might be called the reconquest of the Southwest. Catholic school kids like me know that there were plenty of Spanish missionaries plying their trade from the 16th century onward. To be fair, some of them are here but  too many are cartoons right out of the ‘this is why there was a Reformation playbook.’

Yet evidently the Church fell on hard times in the Southwest  and in the 19th century they set out making it right. This is that story, liberally given the fictional treatment with characters combined, identities flopped and timetable scrambled. It’s not quite historical fiction in the Patrick O’Brian or Hilary Mantel sense but it’s not a novel of time, place or interiority. Cather says she was striving for the sense of legendary tales, in which the language was deliberately devoid of ornament so that the deeds of the heroes stood out.

The archbishop, here, is not truly a hero. A man with a job, he gets it done. His sidekick, a proudly provincial Frenchman who laments the lack of leeks and the effect that has on his cooking, turns out to be the model evangelist. The Archbishop’s triumph is to right the wrongs against the Indians who dwell near Shiprock, (Pictured nearby,  Shiprock is one of the spookier things I’ve encountered on backroads. Makes me believe that people have been connecting with God or whatever you choose to call the life force since before time.)

I should fess up and note this is a second read for me. The first time through I read mostly for the story and the characters. Between readings I’ve actually been to many of the places in the book. So other than checking the veracity I was  able this time to dwell on the language.

Cather sold herself short in her letter to Commonweal. Here’s a beautiful bit, from near the end of the book, as the Archbishop lies on his deathbed:

During those last weeks of the Bishop’s life he thought very little about death; it was the Past he was leaving. The future would take care of itself. But he had an intellectual curiosity about dying; about the changes that took place in a man’s beliefs and scale of values. More and more life seemed to him an experience of the Ego, in no sense the Ego itself. This conviction, he believed, was something apart from his religious life; it was an enlightenment that came to him as a man, a human creature. And he noticed that he judged conduct differently now; his own and that of others. The mistakes of his life seemed unimportant…

Your ego needs to experience this beautiful little book.

VIDEO BONUS
Readers of a certain age might remember the white-haired actor who played the doctor in the 1970s television series Emergency. That was Bobby Troup and the nurse was his played by his wife, Julie London. He wrote ‘Route 66,‘ a classic American road song covered by everyone from the Rolling Stones to the Lords of the New Church. Here’s Nat ‘King’ Cole with the suavest version.