The legendary London graffito of the early 1960s had it that ‘Clapton is God.’ What if the scribblers were wrong?

That’s the thought that went through my head as I finally got around to listening to ‘Wynton Marsalis & Eric Clapton Play the Blues Live from Jazz at Lincoln Center.’ This 2011 release is another one of Wynton’s improbable pairings and you know it’s a different kettle of fish starting with that cover shot of Clapton in a necktie sitting behind a music stand holding a guitar in his lap. Doesn’t the conquering rock guitar God stand and deliver?

Before the Clapton acolytes come for my scalp let me point out that this album has ticked off everyone–the Clapton true believers and jazzbos alike. Don’t take my word for it, there’s this from a 2-star review on Amazon:

I don’t understand it. W. Marsalis will record and release CDs with guys like Willie Nelson and Eric Clapton in the hopes of becoming more relevant to a wider audience but he ignores and belittles contemporary jazz and even some post-bop jazz artists who may incorporate electronic instrumentation and funk elements. In addition he completely ignores (authentic)blues, r&b and hip hop artists who occasionally use elements of jazz and give it(jazz) a fresh voice.

Or this one in the same place from a true EC fan:

This is not the Eric Clapton I held in such high regard all my life. OK I realize he can do anything he wants to do but this is not the direction to take. It is almost comical.

This is usually the territory I’m happiest in. If everyone is pissed off there must be something good happening, right? Well, maybe everybody has a right to be pissed off and be correct once in a while. At least that’s what I’m thinking about this record.

It’s an unfair criticism of Wynton Marsalis that his recordings with other genre artists are ‘just marketing.’ Back in the Swing Era jazz was America’s popular music. Those days are long gone. Jazz has a market share problem and love him or hate him (and for a long time I just didn’t get him) Wynton is trying to do something about it. So if he wants to try drawing in new fans by pairing with Clapton, or even more improbably Willie Nelson, where’s the problem?

Maybe the problem lies in the seeming cynicism behind the choice of guests. EC is not Willie. Not by a long shot. Willie is, for me, one of the great, expressive  singers. He’s a consumate songwriter (he did write ‘Crazy‘ after all). He plays neat, jazz inflected guitar. Clapton is, well, Clapton and we’re not supposed to question that. On the basis of this album maybe we should.

The set consists of 10 songs drawn from a fairly traditional New Orleans repertoire. You get bluesy  numbers like Forty Four and Joe Turner’s Blues. You get W.C. Handy standards from my grandfather’s era like Careless Love. You get a classic funeral song like Just a Closer Walk with Thee. You get Corrine, Corrina with guest vocals and Dobro by Taj Mahal. And you get the by now obligatory rearrangement of Layla.

What you don’t get is a lot of excitement. The criticism that the tempo seems unhurried and unvaried is well-founded, though to be fair Just a Close Walk…. is traditionally part of the hymn and dirge part of a New Orleans jazz funeral. Likewise the complaints about Clapton’s voice are spot on. Singing  in front of horns is a challenge not everyone is up to. Muddy Waters never did it. BB and Albert King did as a mater of course. Perhaps EC should stick to a guitar-oriented band like the blues man he sounds most like, Freddie King.

But it’s the guitar playing that most disappoints here and shows us the limits of the heroes of the rock era. Listen to Corrine, Corrina and you’ll hear the band drop into an Oklahoma shuffle as Clapton solos. And he gives us what we’ve heard before, the solo from Lay Down Sally. Meanwhile Dan Nimmer, on the piano, somehow manages to work the riff from ‘Train Kept a Rolling’ into what he’s doing with his left hand during the piano solo. 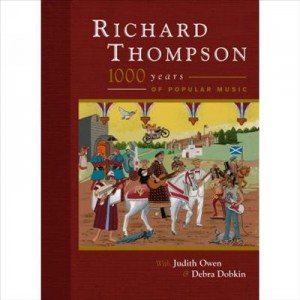 It’s a great example of what the rock Gods can’t do. And it isn’t just Clapton. On 1000 Years of Popular Music (also from 2011) Richard Thompson plays Cole Porter‘s Night and Day. Thankfully he doesn’t sing it but he does feel obligated to take a guitar solo and the result is a lot like someone playing what he thinks a jazz guitar solo sounds like.

An admittedly poor picker, I’m in no position to criticize the musical talents of either EC or RT. I enjoy them both, though RT more. But I’m a good listener and can remember every note I’ve ever heard, even if I can’t wring them out of the neck. And I followed the rock Gods back to the blues guys and their jazz cousins. I’ve been privileged to see some jazz guys sit down, work out an arrangement in a matter of minutes and take off for the skies. It’s an astonishing thing that is at once humbling and beautiful.

It’s worth listening for. But I don’t think it’s ever going to show up with even the best rock guitar player.