The Internet doesn’t always lend itself to discourse so when I find a reasonable interlocutor I think it’s only right to acknowledge that. If I’ve done my detective work correctly, Steve Carr is the man behind Every Record Tells a Story, a blog that does a better job with the subject of music than this space ever will.

In a typically webby way I have no idea what led me to the blog. Somewhere in my wanderings I encountered a link to a post with a provocative title: The Led Zeppelin Controversy: Who Wrote The Songs? Who indeed? I clicked and was not disappointed.

ERTAS’ subject is the songs in the Led Zeppelin catalog that are most notably pilfered. That’s my word, not his. Here’s his perspective: “To accuse Led Zeppelin of stealing old songs is missing the point, because the whole raison d’être of Zeppelin was to take old blues songs and interpret them in a completely new way.” “Changing the song drastically is what Led Zeppelin did throughout their career, but it hasn’t stopped accusations of plagiarism.”

Of course it hasn’t because it shouldn’t.

I suggested that this was a particularly British problem and I stand by that. Within Britain it may be more narrowly Led Zeppelin’s problem.

The fact is, though, that no genre of music has made more of a fuss about its integrity than rock–classic rock in particular. Don’t take my word for it. Fred Goodman did a masterful job of plumbing these contradictions in  his late 90s book The Mansion on the Hill: Dylan, Young, Geffen, Springsteen and the Head-on Collision of Rock and Commerce. 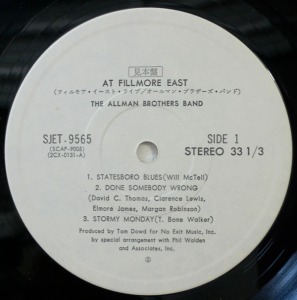 While that read may convince you that commerce is first and foremost, the posturing continues. In 2012’s Jimmy Page interview book the guitar magus expounds at length on his love, devotion and knowledge of the blues. Of course, he also blames any unwitting plagiarism on Robert Plant saying, if I recall correctly, that he was the music guy, and Robert was the blues scholar.

But Zeppelin always trafficked in the idea that they were the next step in the evolution of the blues.

The first album from The Paul Butterfield Blues Band. Note the credits to McKinley Morganfield (aka Muddy Waters) and Willie Dixon.

They said as much and it’s there in the grooves from the first album. So if you’re going to claim some special affinity for a form I think you have some responsibilities.

Zeppelin was hardly the only band playing blues-based music in the 1960s and 1970s.The bands that created the idea of the jam band all “took old…songs and interpreted them in a completely new way.”

And while these overwhelmingly white musicians may have earned much more than the black bluesmen they revered, they made sure to credit their sources as the labels throughout this post illustrate. (I’d also like to note that both the Allman Brothers Band and The Paul Butterfield Blues Band were racially integrated units.) 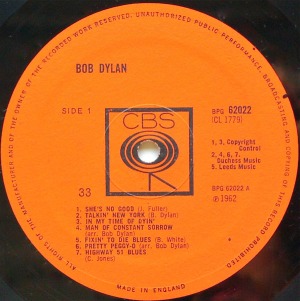 The first Dylan record. It sports credits for Jesse Fuller and Bukka White as well as Traditional.

My colleague over at ERTAS thinks that there’s plenty of blame to go around. In the course of the commentary (and he may be the most responsive blogger ever when it comes to comments) he cites both Bob Dylan and Simon & Garfunkel as folks who lifted liberally. That’s true, but only to an extent.

I say that for two reasons. One, Dylan in particular gave credit where it was due. And two, both artists operated in a different genre than rock. Folk music builds on the idea that you can put new words on an existing melody. That’s the tradition, as it is for he blues which is a folk music. Zeppelin transgressed by claiming authorship and profiting from it.

The Bluesbreaker’s Album that Clapton played on with credit given to Otis Rish and Ray Charles. Maybe this credits thing is Zeppelin’s problem alone.

I remember (although I can’t find it) reading a review of U2‘s The Joshua Tree when it came out that suggested rock was the new folk music. As I recall, the reviewer argued that folk music was the songs everyone knew and sang so rock was the new folk. Well, rap was beginning its ascent around that time and just like rock it claimed authenticity and artistic integrity. At least, though, the rappers openly ‘sampled’ existing material.

ERTAS points out that a lot of record companies shafted a lot of musicians and that’s sadly true. We could lay this whole mess at Peter Grant‘s feet if only the band had kept their mouths shut. I know ERTAS disagrees with me that this is a British problem so I’m offering up an example he’ll recognize from the classic rock canon: Blind Faith‘s Can’t Find My Way Home and Naked Eye by The Who. These are clearly the same song and, from the sound of it, must have a common antecedent. I just need to spend more time with the Pentangle catalog to identify it. 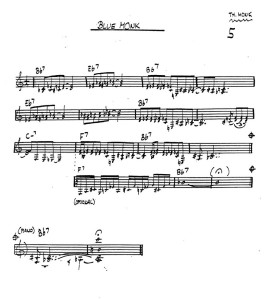 The written music for Blue Monk, a standard 12-bar blues progression in B flat.

I’m going to end by pointing out to my new friend that he’s wrong about one thing. Here’s what he says. “You can’t copyright Bo Diddley’s shuffle (otherwise The Smiths would owe Diddley money for “How Soon Is Now”). You can’t copyright the chord progressions of 12 bar blues, or a particular guitar lick.”

The image at right is a transcription of a copyrighted piece of music: Theolonius Monk‘s Blue Monk. The piece is well-known among guitar players because it’s a standard 12 bar blues with a turnaround, in B flat. It’s easily transposed down a 1/2 step to A and played in the first position on a guitar. It’s as old as the hills, heard on dozens of records from the 1920s. But Monk’s estate owns it.

(Thanks ERTAS for the opportunity to have a dialog.)

Someday I’ll figure out streaming audio. For now, here’s Thelonious himself in 1958 or so playing Blue Monk. Below that are Can’t Find My Way Home and Naked Eye. Happy vieweing.

One thought on “A Musical Discursion”