There’s a simple explanation for why, in spite of all this reading, I wasn’t an English major: I’m an ignoramus. 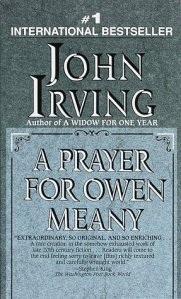 There’s just no sense pretending otherwise. Too often I sat in class wondering if I had read something completely different from my classmates. Don’t misunderstand me: I was adept enough at faking it to score highly. I just knew I was missing something.

That sense probably resulted in my aversion to re-reading, which I’ve mentioned before.  So why would I spend my time once again working my way through this late 1980s bestseller? Because I think it’s a truly great book. And like all great books it’s really about God. Or at least faith in the existence of a God.

There, I’ve made it a must-read, haven’t I? Let me start by saying that there is a plot. John Irving does know how to tell a story. I just haven’t enjoyed many of the ones he’s told. I found The World According to Garp unreadable (but I did see the movie, Robin Williams‘ first). Same with The Hotel New Hampshire. And while I enjoyed The Cider House Rules enough to actually finish it (and see the movie) the politics were a tad insufferable. I suspect those politics may be why it was selected by the Modern Library.

Politics, in fact, may be the only flaw in Owen Meany. They are also, after about the halfway point, inescapable. I suppose that’s by design since one way to read the book is as a screaming rebuke aimed at politicians who would reprise the mistakes of the Vietnam War. A quarter century, a couple of wars and insane acts of mayhem later getting so incensed about fighting the Sandinistas seems almost quaint.

Irving is a War Baby, the folks who actually begin to embody the stereotypical Baby Boomer worldview and I suppose he shares the self-besottment of his generational ilk.  He certainly demonstrates the attendant tendency to romanticize and imbue their actions and beliefs with a little bit more weight than the actual record will bear. But we all have our weaknesses.

A Prayer for Owen Meany is a tale, told in retrospect, of boys growing up. Owen Meany, though, is no ordinary boy. Smaller than average, maybe even diminutive, Owen is easily treated as a plaything by other boys. And then there’s his voice. Or, I should say, HIS VOICE. Owen speaks in capital letters, an approach a bit more startling before email made that the equivalent of screaming. That voice pronounces. It makes oracular statements. It speaks truth to power. It talks about the things boys talk about. And it talks about things yet to come.

Owen’s best friend is John Wheelwright, scion of an old-line (and one suspects old money) New Hampshire family. By comparison the Meany’s hail from humbler stock, operating a granite quarry. We see far more of the Wheelwrights than we do of the Meanys who wander in and out of the plot like Banquo‘s ghost always setting something unexpected into motion. Owen is more or less adopted by the Wheelwrights even though you could make a strong case that a lot of trouble follows in Owen’s wake.

Marine Corps sniper team at Khe Sanh, one of the bloodiest battles of the Vietnam fiasco.
Original photo by David Douglas Duncan. Donated for use by his estate to the USMC.

Owen is on the road to his destiny. We don’t know that at first, but there are hints. Along the way there are also plenty of boys-growing-up hijinks.

Maybe I’m showing my age or growing nostalgic, but the running-around-outside and getting-up-to-mischief bits were at once familiar, comforting and at times outrageously funny. It’s a line in American literature that stretches back to Tom Sawyer and I fail to see how anything from the age of the videogame-playing couch potato will ever measure up.

And since Owen’s is also a coming of age story there’s plenty of room for earnest, adolescent grappling with philosophical questions. I fear that for many people that’s the only time in their lives they ever do that. I’m a grappler and I suspect that John Irving is, too. He is, after all, a wrestler (and made a cameo as the wrestling ref in the Garp movie). One of my favorite lines may be this observation of Owen’s about a preacher: “BELIEF IS NOT AN INTELLECTUAL MATTER. IF HE HAS SO MUCH DOUBT, HE’S IN THE WRONG BUSINESS.”

Along the way Owen does some saving although he often pays a price for that. One of the things he saves is John Wheelwright’s academic career. Our narrator is a middle-aged,  expatriate English teacher with a truncated digit. It’s Owen Meany who teaches him how to read closely, turning a learning disability into an advantage.

Owen’s lessons in  reading are what convinced me of my own gross stupidity. As Wheelwright struggles with Thomas Hardy Owen alternately helps and berates him, saying at one point about Hardy, “it’s all there on the page.”

Indeed it is, although I didn’t see that until Christmas decorations on Nassau Street shook me out of my torpor. And what did that was repetition. Owen is always saying “Don’t be afraid.” That’s what Jesus says to his disciples when he walks on the water and appears to them in the middle of the Sea of Galillee.

And then it all became clear. The cast of a dozen or so characters. The best friend that Owen is always saying he loved, named John. The presentiment of things yet  to come and the prayers to let them pass. Even John Wheelwright, it turns out, is an American preacher of the Colonial era.

Of course it’s a powerful story. We’ve heard it before after all and it has, for better or worse, changed the world.

They made a movie out of this book that I’ve never seen: Simon Birch. So instead let me introduce you to a soul-stirring anthem from a Christian tradition with better music than my own. If you’ve seen The Apostle you may know Lyle Lovett‘s rockhousin’ version of this old spiritual. Here Sam Cooke‘s original band, The Soul Stirrers, brings it to life.

2 thoughts on “A Soldier in the Army of the Lord”