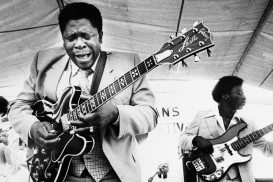 Last week, at the age of 89, B.B. King passed away. Despite a flurry of surprisingly good albums over the last 10 years or so, he’d not been on my must-listen list. If I’m honest, and I try to be, Albert was always my favorite King, and Freddie came next. I liked B.B. I just never loved him. (I have been known to remarkthat Mrs. AHC, neé King, is here because of both her boundless tolerance and maiden surname, but I digress.)

B.B. was around for so long that it was easy to take him for granted. He was probably the only blues player allowed on the Tonight Show during the Carson era. He was certainly the blues pitch-man of choice even if he wound up shilling for some high-fat fast foods that weren’t good for his chronic Type II diabetes let alone anyone else’s health. And even before the mass market goods his imprimatur was put to good use by Gibson for their Lab Series guitar amps back in the 70s. 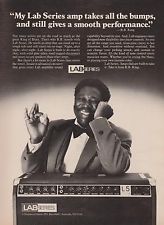 The pitchman cometh.
B.B. pushing a product he knew about and used circa 1978

No one, though, is going to remember B.B. King for his contributions to commerce. What he’ll be remembered for is his music and that’s how it should be. By now, all the guitar gods and musical writers have weighed in so it’s safe to offer a more personal view.

I mentioned the recent albums at the outset but for me the core records were released between 1962 and 1970, That’s a span from Live at the Regal through the album with the unfortunate cover art, Indianola Mississippi Seeds. By the time of the Regal record King had his entire act worked out: the band with the horn section, the call and response with the audience, the guitar that scorched at times and mostly sang but never went on too long.

It’s also the period during which B.B. released the one hit that even non-fans probably know in passing, “The Thrill is Gone.” I always thought the success of that song–and it truly is one of the songs that sounds like 1969 to me-was ironic because it’s the one B.B. King song that doesn’t sound like B.B. King. To me it’s always sounded like an attempt to run the Albert King playbook introduced by the big man on his Years Gone By album which was recorded earlier that year and released at least a month before recording started on B.B.’s record.

A very young BB kin g in 1952
when he played live on Memphis’
Mother Station of the Negroes, WDIA

Look again at the dates I mentioned above and something else should jump out at you. By 1970 we were well into the Classic Rock era. Those turgid, self-indulgent guitar (and everything else) solos that punk came to kill were ascendant and every fretboard burning ding dong who has been singing B.B.’s importance in his personal musical development had really started listening back in the 1950s.

That was a whole different era, although in some ways not unlike our own. Singles dominated. Regional charts mattered. Artists played live on the radio and made their living at a combination of days jobs and night gigs. 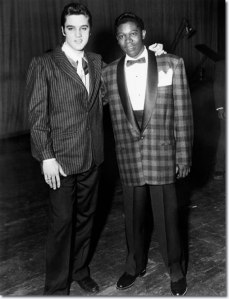 Memphis’ Dueling Kings
It’s a bit unbelievable they were near contemporaries and gigging at the same time.

What wasn’t part of that mix was extensive soloing. When I think about B.B. King’s playing two things stand out. He plays beautiful, lyrical lines that aren’t the usual root-third-fifth. And he has a distinct vibrato that is closer to the style violin players employ than most guitar players do, moving parallel to the strings rather than perpendicular.

Notice I said lines. B.B. King’s original style was to sing a line and then echo it on the guitar. He was known as much as a singer as a guitar player, as indeed most blues greats were.

So how we got from “Three O’Clock Blues“ to 16-minute versions of Willie Dixon‘s “Spoonful” still escapes me.

But that wasn’t B.B.’s fault. For almost sixty years he kept doing the same thing with some variation but always with great enthusiasm. I think that especially for those bluesmen born in and around the Depression nothing was taken for granted, especially the ability to make a living let alone to make a living making music. 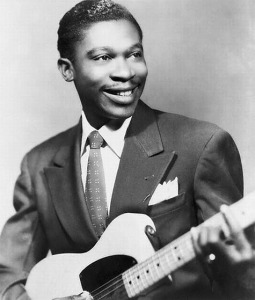 This one I could not pass up. The man most associated with a Gibson ES-335 he called Lucille (they later created a model named that for him) holding the guitar most often associated with Muddy Waters: a Fender Telecaster.

So they showed up for work every night, in a collar and tie (and, later, formal wear for B.B.), with a beuniformed horn section if they had one and put on a show. I don’t think it ever occurred to them that the paying audience, whose living was equally hard to come by, deserved any less respect. And I never heard anyone question the authenticity of a man who played in a polyester suit instead of some faux working man’s costume sitting atop a pair of Levi’s.

I think it’s a good thing that some aging rockers have taken up the practice of dressing up rather than in costume. Clapton even donned a tie when he played with Marsalis.

In the end, though, it’s always about the music, at least for me. B.B. King helped form the body of post-WWII blues music. Leave aside the ‘progenitor of guitar greats’ bit. The horns-based Memphis blues sound-a very distinct form that can sound more polished than the raw Chicago blues of the Chess label or the more country/swing sounding sides emanating from Texas–was made popular in large part by B.B. King’s incessant touring. 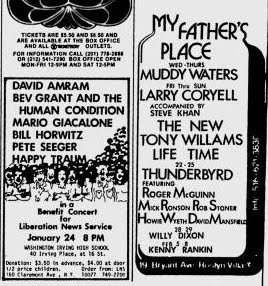 A typical week at MFP, the greatest club there ever was.

I was fortunate that at the point I started getting my ears on many of the blues greats were still playing. I lived on Long Island where we were lucky enough to have a great venue (whose name caused no end of confusion) called My Father’s Place that booked a lot of those acts.

By the time my friends and I saw B.B. King there in 1980 we’d been to a number of shows and knew to expect a racially mixed audience. We also knew that the black families that brought their sons and daughters, who may have had different musical preferences, would be dressed for the occasion.

So with our long hair combed and foul language in check we, too, put on our high school graduation suits (without neckties of course) for B.B. I’ve never regretted doing so.

New Jersey‘s John Gorka, a man who regularly turns out enough great songs to overcome his bias towards crunchy granola music, may have had the last, best word on B.B. King. I couldn’t find a performance video so this slide show will have to do.

One thought on “Man He’s Got a Lot of Soul”