I grew up lost in historical fiction. Johnny Tremain,  was big. So was The Link Boys, set in London a bit earlier than 1700.  I can’t explain the fascination. I only know it faded sometime after I read Ragtime. Too many coincidences for one family, I thought.

And so, when I read a profile of Hilary Mantel,  I wondered what the fuss was about. In part it was the subject matter. The only thing I can keep straight about English history are bands from The Beatles onward. The rest is all pomp and vainglory.

Then a copy of Wolf Hall, billed as the first volume in the Thomas Cromwell trilogy, fell into my hands.  The bandwagon effect starts on the cover. New York Times bestseller. Winner of the Man Booker Prize. I’ve never understood literary prizes–why they’re given; why they’re sought; why I should care–but they seem to loom large in British letters.

So what shall we make of this historical fiction? After all, we know what happens (at least readers better versed in the story of the Tudors than I am will). One reviewer even thinks the novel’s great trick is to make us care despite that. Me, I’m not so sure. In DeLilo‘s Libra we know what’s going to happen, too, but it’s the bigger picture that fascinates.

If clothes make the man, is it any wonder that donning one of these turned you into a scheming wanker?

No, I think this cast of fools captures the imagination because they’re stand ins.  I think the whole book is an allegory focused on power at time of immense change. What fascinates aren’t the doublets and ducats, it’s just how familiar these great historical figures are in their pettiness, solipsism and greed.

It is, to be sure, quite a cast. Our principal players are Henry (VIII) Tudor, King of England, Anne Boleyn, by book’s end his wife (and therefore Queen? I suppose. Such things confuse me. Why isn’t she Queen consort? And in any case, why should a question like that last one not lead to revolution. But, this is England.) Sir Thomas More, intellectual, politician, future Saint and Thomas Cromwell, a man on the make.

To be sure there are a gazillion other players and I continually found myself flipping to the 8 pages or so of characters listed at the front of the book. A recurring joke is that everyone is named Thomas.

Peter O’Toole (l) as Henry II and Sir Richard Burton (r) as Thomas Becket. One concludes that all British kings named Henry need a priest/counselor named Thomas whom they will dispose of, thus ensuring a new saint.

Even the surnames repeat. Is our Cromwell here related to the one played by Richard Harris? Damned if I know. Add in the Lords, who are referred to by their family names and their seats in no particular fashion, and it’s a mess for a radical egalitarian from the Colonies like me.

As our tale begins Henry, king for two decades or so, has no male heir. He has a daughter, but that hardly counts. So he needs to trade in his wife, Catherine, of royal Spanish lineage and formerly married to his brother Arthur. Henry desires a more fertile spouse and so he needs a divorce.

What stands in the way is Rome, more specifically the Roman Catholic Church. Henry’s divorce turns on the dispensation he received to marry Catherine after Arthur’s death. This isn’t, as you might guess, about infallibility since that doctrine was advanced some three centuries in the future. No, this is purely and simply about who’s boss. Henry and the Pope disagree on that point. 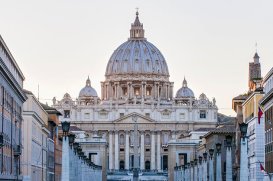 What’s left of the Pope’s temporal realm. At the time of Henry VIII there were troops as well as buildings.

Early on we meet Cardinal Thomas Wolsey, Rome’s man-on-the-ground in Albion. He is also Lord Chancellor of England, a quite powerful post. But Henry can’t get what he wants from Wolsey so, encouraged by Lady Anne, the scheming  begins. Importantly, Wolsey’s right hand man/fixer is Thomas Cromwell.

The Cardinal is arrested on a charge just shy of treason and has the good grace to die before trial.  When we once again meet up with Cromwell, the Cardinal’s man is immersed  in his own business while keeping an eye on the Court. His interest, it seems although it is never baldly stated, is in making the world safe for the Gospel. Insofar as that’s what Rome thinks it does, those are code words for advancing the Lutheran case for reform.

By now we’ve learned something of Cromwell’s past. Born to a blacksmith (an abusive father, even by 16th century standards), a runaway in his teens, a mercenary and man about Europe. He is, before the term existed, a self-made man. Speaker of multiple languages; successful woolen merchant; skilled accountant; lawyer; cook; friend of artists, philosophers,  theologians and astronomers. He’s a thinking man’s MacGyver.

As the tale unfolds Cromwell makes himself useful to the King as he did to the Cardinal. And so Cromwell, of no birth worth talking about, holding no claim to the throne and no (although this is unspoken) use for the aristocracy, rises in power.

His nemesis is Thomas More with whom Cromwell has a long-standing issue.  You should know More, though,  the author of Utopia and the hero of Robert Bolt‘s play, A Man for All Seasons.

If Mantel achieves one thing it’s to make all her characters unlikable which is no small feat. Henry the 8th? A self-absorbed hedonist obsessed with his legacy. Cardinal Wolsey? In a later age he’d be the poster child for disallowing priests to hold political positions. Queen Catherine? A victim, to be sure, but too stubborn to admit the trouble she’s causing herself and her daughter. Anne Boleyn? A scheming, manipulative harpy. Her father, the diplomat and minor noble Thomas Boleyn? Stockman and pimp of his own exclusive brothel, the only client being the King.

And the other Thomases? More and Cromwell? Well More is no hero, intellectual or otherwise, in this telling. If anything, he’s the star reactionary, using the powers of his office (he is named Lord Chancellor after Wosley’s demise) to prop up the Church. It’s not going too far to call him Chelsea‘s Torquemada. He even has the right first name.

All that building constantly going on at Austin Friars, Cromwell’s home, is more than just  the edifice complex of a newly enriched and empowered man. It’s a metaphor for the man himself; he is ever in a state of (re)construction and revision, ever driving towards some end seen only by him. And that end, I fear, is the will to power.

In the telling More dies, Henry gets his divorce (but not his male heir) and Cromwell his separation from Rome. I like More less than I had, but, of them all, he’s still the only one worth any consideration. If you are going to piss off everyone around you enough to have them cut off your head, better to do it over a fundamental principle than naked self-interest.