The Economic Consequences of the Peace
John Maynard Keynes

Once I read a novel, by Camilo José Cela, that was published under the most wonderful imprint ever to appear on a spine: Lost Books of the 20th Century.  Judging by the number of extant editions, the present work is anything but lost even though I’m thinking of starting a list of ‘great books you are supposed to have read, but haven’t.’

I’ll let you know if I get around to it.

In the meantime, here’s the book that brought Maynard Keynes to public attention although by the time it appeared he was pretty well established. Government insider, published economic theorist (with the most minimal education in the subject; life was arguably better before ossification set in), member in  good standing of the Bloomsbury set. Keynes set the standard for public intellectuals before the concept even emerged.

Eventually Keynes went on to topple the reigning economic paradigm. The result, what we all now know as Keynesian economics, emerged in the crucible of the Great Depression and was ratified in post-World War II Europe and the United States. So all-pervasive was the Keynesian approach that Richard Nixon was, erroneously, credited with saying, “We are all Keynisans now.” (It’s a rich irony that the actual author of that phrase was about to become the dominant figure in US economic thinking soon after it was published,  shaping the last 40 years of economic dogma. But, I digress.) 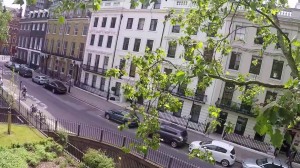 Bloomsbury Square, London.
Center of Keynes’ intellectual milieu. Walking distance to the British Museum and, as you can see, hardship duty.

Before there was Keynsianism, though, and The General Theory of  Employment, Interest and Money (1936),  (not to mention his other well-known works, The Means to Prosperity (1933) and A Treatise on Probability (1921)),  there was this slender volume. One tends to hear about it in an introductory economics class or a history class focused on the period between the Word Wars. But I’ve never met anyone, even a professor, who has actually read it.

So I decided to address that issue when I uncharacteristically found myself in Cambridge, Mass. with nothing to read. They tell me Cambridge is a college town which probably explains why it was so easy to find a bookstore. The volume I was searching out was too new to find a deal on. That left me prowling the shelves where I stumbled upon Lord Keynes at an acceptable price.

Eminent Bloomsburians en plein air. The Bells, Virginia Woolf and Keynes. It’s not what you know, though that helps, too,

By the end of the first World War Keynes was a young man on the move in government circles. So valued was his intellect that he was appointed a member of the delegation that represented Great Britain in negotiating the Treaty of Versailles.  So disturbed was Keynes by what he saw that he resigned his position, departed France and wrote this volume which was quickly published.

Let me try to frame a (very) rough analogy in terms of recent US events. Imagine that Peter Orszag, in the middle of negotiating the Affordable Care Act, suddenly resigned and departed Washington only to emerge, a short time later, with a book that was highly critical of the act. In fact not merely critical, but predicting disaster in the form of escalating and unsustainable costs. Whatever you think of the policy or its criticism, the personality issues would matter. 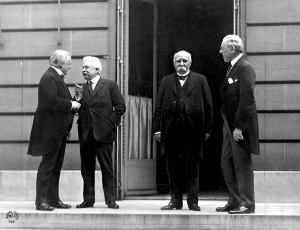 Keynes spares no one as he dissects the immense wrongs baked into the treaty. And he doesn’t shirk at laying the blame, which he apportions among three fourths of the major players.  Let’s just see what he has to say about those gentlemen, the Big Four as they are known. (Keynes says little of the Italian minister, Vittorio Orlando, so it’s really the Big Three.)

On Clemenceau: ” …silent and aloof…throned, in his gray gloves, on the brocade chair, dry in soul and empty of hope, very old and tired , but surveying the scene with a cynical and almost impish air…He felt about France what Pericles felt of Athens.” (p. 17)

On Lloyd George: “[The Prime Minister] had pledged himself and his Government to make demands of a helpless enemy inconsistent with solemn engagements on our part, on the faith of which this enemy had laid down his arms.” (p. 81)

On Woodrow Wilson: “The President’s attitude to his colleagues had now become: I want to help you so far as I can; I see your difficulties and I should like to be able to agree to what you propose; but I can nothing that is not just and right…” (p.27) 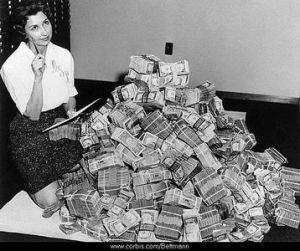 One economic consequence of the peace: the nearly worthless currency of the Weimar republic. It was this episode that led me to my speculative belief that an economy is a shared social experience. In this case, one that continues to haunt the German imagination.

When the Treaty was finished what had these Titans wrought? Well, Clemenceau got his way and Germany lie prostrate. Keynes notes, “It is an extraordinary fact that the fundamental economic problems of a Europe starving and disintegrating before their eyes, was the one question in which it was impossible to arouse the interest of the Four.” (p.129)

I’ve intentionally focused on Keynes’ impressions and sense of what will ensue. What lies at the heart of the book, though, is his economic analysis. This is not latter-day, calculus-based econometrics; straight-ahead bookkeeping is more like it. Anyone who can read a balance sheet can follow the rather simple fact that no matter how you cut it the numbers just don’t add up, and never will.

Always weak on European history, I learned some things I did not know. First, the Treaty itself is hundreds of articles long. Clearly Keynes has read it since he quotes from deep in the higher-numbered items. Second, there was more than one treaty; Austria, in particular, got separate treatment. Third, even as long ago as 1919 it became convenient to denominate debts and payments in dollars. I even learned the British had their own word for billion–milliard.

The Hall of Mirrors at Versailles, where the Treaty was signed. (You can see why there was a French Revolution.)

Did Keynes have a better way? Of course he did and one suspects it was probably as popular with the British electorate as the League of Nations was with the US populace. That statement probably still holds true today since his solution includes a European free-trade zone with a super-governmental organization for keeping it running.  He also wanted a drastic reduction in the claimed amounts, renunciation of claims by certain parties and inter-ally debt forgiveness.

It’s quite a package and essentially the one that was put into place after World War II. The Treaty of Versailles is often held to be one of the reasons there was a second war. To read this book is to know that at least one player saw trouble coming.

It’s a shame he wasn’t listened to by more people who should have known better.