Regarding the Pain of Others
Susan Sontag 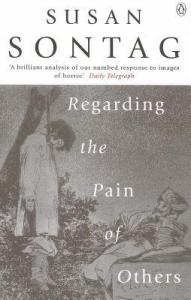 I have said before that I have a dead spot in my brain when it comes to that  iconic triumvirate of 60s writers,  Didion, Vidal and Sontag,  You may recall that I came up goose eggs when I ventured beyond Didion’s masterwork into what was, alas, much more typical for her.

And although I enjoyed Best of Enemies, I’m not yet ready to take on Gore Vidal. (I confess to an inexplicable delight in the work of Vidal’s nemesis, William F. Buckley, Jr. )

That leaves Susan Sontag, my former, in the loosest sense of the word, neighbor.

Sontag has a reputation for her fierce (there really is no other word) intelligence and, among her diehard fans, literary talents.  On the latter front, my only exposure has been her 1980s novel, The Volcano Lover. I always say: don’t believe one reader, especially if it’s me, and books like this are the reason why. It could well be a masterpiece. For me, though, It was everything I’ve come to hate in the modern novel; I never finished it. 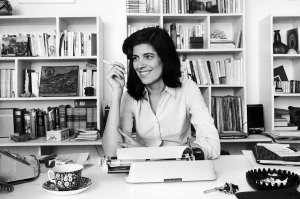 Other than that I’d read an occasional essay. If I found Sontag’s fiction unwelcoming,  her more philosophical works were downright intimidating. I’m pretty sure the first time I’d heard of her it was in the context of the essay that announced her arrival as a thinker about aesthetics.

Notes On Camp didn’t just reflect a faddish word of the moment, it took on as a serious subject what might have been otherwise treated as trash. In doing so Sontag established herself as a, maybe the, serious thinker about matters of popular culture .

A bevy of works followed. Against Interpretation. On Photography. Illness as Metaphor. Susan had a lot of things to think about. Sontag reasoned and her readers nodded in agreement.

I’m not trying to dismiss her. In actual fact Sontag did bring a rigor to discussing what was often too dismissed as ‘merely’ entertainment or pictures or sickness.

The Falling Soldier
by Robert Capa/Magnum
From the Gilman Collection at the
Metropolitan Museum of Art.
No infringement intended.

The present volume reads as though it were an addendum to the 1977 book about photography. From the outset Sontag is dealing with and thinking about (mostly) photographic images. TV and other graphic forms intrude, but the primary medium under discussion is the photograph and the subject of that photography is, for the most part, war.

This book, it turns out, had its origin in a lecture, or series of lectures Sontag gave in the early aughts. Had you not read the notes and learned that you might have guessed it anyway.

Sontag’s style isn’t always this approachable. Here you encounter words as though they were spoken. As in emphasizing a point  by punctuating it. Thereby stressing a thought that has seemingly ended. But that seems in need of reinforcement. It’s a spoken technique, transferred to the page, that stands apart from all I’d previously read.

I used the word fierce to describe Sontag’s intelligence. Here’s why. Early on, when establishing the place of photographs in representing facts and emotions to viewers, she makes a provocative statement, one that might rankle even more today.

“To the militant, identity is everything. ” she tells us. (p. 10) Later she illustrates this with folks not often though of as militants. She offers one vignette (and let’s be clear, the vignettes are what separates Sontag from the pure, academic philosopher) in which the residents of Sarajevo, invited to a gallery show of photographs depicting the siege of their city and a previous siege in Sudan, are offended. Theirs is the horror and suffering that matters. It is not to be diluted or diminished by comparison.

Certain photographs, including the Capa photo shown above, bear particular scrutiny.  It’s almost ironic that she spend so much time on this photo since after her death it became the subject of a debate as to whether it was staged or not.

Sontag accepts it as factual even though she spends considerable time on how shots taken in earlier wars were staged, including some of Mathew Brady’s Civil War and of the Rough Riders charge up San Juan Hill.

She gets  a lot of mileage out of the Capa shot, seeing it not only as a depiction of an actual event but as an example of what happens when it is placed in a context. In this case that would be Life magazine where a Vitalis ad appeared on the opposite page. She extends that to television news images, starting with the Vietnam War, and their presence in our kitchens and living rooms.

One of the most famous Vietnam War photos, which Sontag also discusses. I remember this on the front page of The NY Daily News as the end of 5th grad approached. It still shocks.

The only issue with such an analysis is that it isn’t new and it isn’t Sontag’s. I first heard such a claim 20 years before this volume was published. It was attributed to the Frankfurt School. The two zori-scholars above, along with Walter Benjamin,  laid all that out in the 1930s and 40s. I can only conclude this is yet another example of Americans preferring the homegrown, however warmed over, to the original.

That doesn’t make it any less worthy of reading and there are important thoughts here. Maybe it’s best to  let the author speak for herself:

Photographs that everyone recognizes are now a constituent part of what a society thinks about, or declares it has chosen to think about. It calls these ideas “memories” and that is, over the long run, a fiction. Strictly speaking, there is no such thing as collective memory–part of the same family of spurious notions as collective guilt. But there is collectively  instruction.
P.   85

In the end the book is less an inspection of suffering and more an interrogation of our attitudes towards representations of suffering that have become commodities. In a world where, as Sontag points out, war is the norm and peace the anomaly, where the things humans are capable of doing to each other are so common as to become commonplace, it’s worth thinking about.

VIDEO BONUS
Strictly speaking this is not a video since there is no motion. In 1979 the Leeds-based post-punk group Gang of Four released their debut album, Entertainment! It’s a masterpiece that earned them the distinction of being able to set political discourse to a dance beat. They covered the same Horkehimer/Adorno/Benjamin/Sontag ground in under 4 minutes in a song about the news. As the lads put it, “guerrilla war struggle is a new entertainment.”

One thought on “Everybody Hurts”