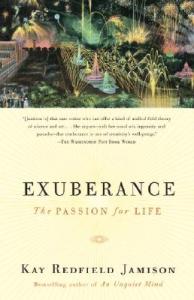 Here’s a head-scratching editorial proposition for you: much of the psychological literature is about depressed states.  Our author suggests that going back to the time of the ancient Greeks, melancholy and other less-sunny moods have dominated thinking about, and interest in, mental health. So why not examine the opposite end of the spectrum?

The short answer was given in the first sentence: there’s a paucity of data and studies. Still, we’ve a publishing industry to operate and a line extension is a line extension. So have at it , Dr. Jamison.

I’m being a bit unfair, yet sometimes it’s more apparent than others that there’s a publishing enterprise chugging along. Success doesn’t just breed success, it breeds repetition. In principle I’m not opposed to that. I’ve read plenty of mysteries and devoured the Hardy Boys (along with Nancy Drew) in my childhood. I just think the bar ought to be held a little higher in some areas than others.

Two Men and a Waterfall
John Muir, (l.) and Teddy Roosevelt (r.) atop a peak in the Yosemite Valley. These guys had energy enough for ten men.

Kay Redfield Jamison is a psychiatrist who landed on my radar screen almost 20 years ago. She’d written a memoir of her own manic-depressive illness and I was trying to understand the falling apart human being to whom I was espoused. As I recall, upon her finishing it, said spouse threw the volume at my head saying something along the line of, “I’m not some type in a book.”

An Unquiet Mind, though, did help me. better understand what was going on. So I stuck around  when Jamison expanded her scope and turned her attention to the intersection of art and madness.

That might be a bit overstated but Touched with Fire, subtitled Manic-Depressive Illness and the Artistic Temperament, told what has become a familiar tale in a new way. Now we could reexamine old stories–Van Gogh and his ear, Byron and his appetites, Virginia Woolf with her pockets full of rocks–in light of the latest medical evidence. Not only could we medicalize their biographies, we could wonder how much personal anguish society is willing to accept as the price of artistry. 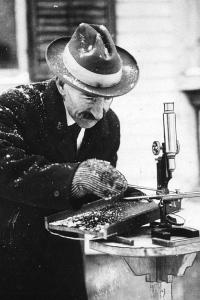 Wilson ‘Snowflake’ Bentley.
1865-1931
A man who could be overjoyed in a blizzard, he taught us through demonstration that every snowflake is different.
(AP Photo/Courtesy of the Jericho Historical Society.)

It was a fascinating read even as it made me wonder whether the premise said more about the author and her readers than it did about the artists examined. I mean, at just what point in medical school or psychiatric residency is  diagnosis of the long-dead covered?

The present volume offers a similar gloss on the more positive emotions. As with the artist book, biography plays a big role here. This time, though, our author ups the ante. On the second page of text she says of herself and her colleagues, “We have given sorrow many words, but a passion for life few.” (p. 4) What follow is her attempt at a corrective.

Jamison begins with sketches of three more or less contemporaries. The first two are looked at in tandem as they merged their passions to create the great National Park at Yosemite. Alone, Theodore Roosevelt and John Muir  each left a significant legacy. Together their actions left a permanent stamp on a nation. Reading of their accomplishments is no less daunting than wondering how Hamilton got so much done.

Next up we meet someone I’d never heard of before. Wilson ‘Snowflake’ Bentley, a Vermont native who demonstrated to the  world that no two snowflakes are alike. He did that by brute force, inventing a way of photographing individual flakes and then treating them as, simultaneously, data and examples of nature’s incredible beauty.

I suspect (Jamison never actually says this) that Bentley might have initially been considered a bit of a crank by his neighbors. New England has earned its reputation as a land of flint. And yet he soldiered on publishing paeans to the beauty of snowflakes in scientific journals.

Too much exuberance can lead to over-confidence and, occasionally, disaster.

Then we start ranging farther afield. We learn about exuberance in other mammals, or at least what Jamison calls exuberance. In these passages,including a lengthy look at elephant communities, Jamison presents plenty of evidence that animals are experiencing the delight of being alive.

I found it a stretch, though, to call it exuberance. I’m not dismissing the idea that animals have emotions, mind you, I did use the word delight. I just think there’s anthropomorphic danger in pinning a point on a human emotional scale to a creature we don’t share a common language with.

Jamison is, I think, on safer ground, when she delves into literature, more specifically children’s literature. She has two great examples: Mr. Toad, from The Wind in the Willows and Tigger, from the Winnie the Pooh series. She uses both to demonstrate great exuberance and its possible pitfalls.

Toad’s doppelgänger and first cousin delivering the brief for exuberance. Disney owns the copyright to all Pooh renderings, including the Shepard originals. No infringement intended.

Here’s the thing: Toad and Tigger are in many ways the same character. In fact, A.A. Milne, the creator of Tigger, Pooh and the other denizens of the Hundred Acre Wood, adapted a chunk of Kenneth Grahame‘s novel into a play, Toad of Toad Hall.

I guess that brings me back to where I started because redundancy is first cousin to repetition. I read books like this to keep my hand in with the rigor of science. So I’m always disappointed when what I get is the latest version of yet again the same book by a familiar author.

Will you learn anything from this book? Yes, but not much about the title I fear. But you can’t say you weren’t warned. It’s right there, on page 4.

One thought on “You Must be Real Far Gone”