Other People’s Money: The Real Business of Finance
John Kay 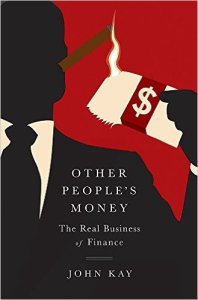 “The culture of anonymous trading is divorced from economic context, devalues or eliminates personal relationships and fosters the self-aggrandising self.” (p. 269)
John Kay, 2015

American economists don’t make statements like the second  quote above. Doing so could be hazardous to their career health. Thankfully Dr. Kay is British and so is  willing to say the things his colleagues on this side of the Atlantic (and to be fair, many on his side as well), are unwilling to.

And what he has to say isn’t pretty.

Before we tun to that, though, let’s revisit the 7-syllable word that struck terror in the hearts of businessmen (and bankers) a couple of decades ago: disintermediation. That mouthful described the fearsome scenario in which a consumer, armed with a web connection, would do their own exploring and buy directly. Whole industries would crumble. Business would never be the same.

You can have a lot of fun illustrating disintermediation.

The d-word struck particular fear in bankers. What if borrowers shopped around instead of driving to the local branch? What if they did the economically sensible thing and looked for the lowest rate? How would banks make money?

In reality, banks had already begun changing the way they make money. And in no way were they disintermediated. If anything, the new models doubled-down on playing the role of intermediary in increasingly complex transactions that were of limited, perhaps even no, economic value.

This is, in its way, not terribly different from other business models. The darlings of the “sharing economy“–Uber, Airbnb and the like–aren’t unlocking previously inaccessible economic value. They’re acting as agents–intermediaries–for independent actors and paying themselves handsomely as they destroy local systems in favor of a software-mediated model. Invest in the stocks if you care to, just be honest about the destruction part of the equation because the creative part is actually almost as old as business itself.

Paul Volcker
Chairman of the Federal Reserve from 1970 to 1987. A giant among men and central bankers.

The same holds for banks. Paul Volcker, who is more responsible for the growth of the US economy in the 1980s than any policy proposed and implemented by the Reagan Administration or Congress, has famously said that the only useful financial innovation of the past quarter century was the ATM.  Professor Kay–and as a ringside spectator and adult who couldn’t escape it, I–would agree.

Here’s the condensed version of the Kay argument: banks (which for these purposes include investment banks) serve a few key purposes. First and foremost they operate the payments system. They fund government activity and home purchases by taking in the savings of individuals and redeploying them as mortgages and using them to purchase government bonds. And, in the rarefied air of Wall Street and the City, they help identify emerging economic opportunities and allocate capital.

That’s it and, in fact, the greatest number of people working for financial companies are doing work related to maintaining the plumbing of the payments system. This unglamorous, and, in terms of the financial sector, underpaid work is the lifeblood of modern economies. Professor Kay has convinced me that the system is essentially a public utility and perhaps should be operated as one.

That brings us to holding savings and what to do with the money. While banks write plenty of business loans the fact is that those loans are in large part a function of how the tax code treats debt. Most large enterprises are self-funding and could (and in the past many have) run their own banking operations.  In aggregating the savings of individuals Kay argues, bankers have a responsibility not to blow the place up.

His heroes in this regard are fictional: George Bailey, the lead character of “It’s a Wonderful Life“ and the appropriately named George Banks in Mary Poppins. Dr. Kay can complicate this as much as any PhD so it’s nice he chose to demonstrate it with widely-known examples. As a fellow social scientist I enjoyed his application of the Gemeinschaft/Gesellschaft dichotomy to the economic realm. I’ll feel much less inhibited now about occasionally borrowing from the economists.

The point is that it’s the job of the banker to judge character and stay close to the customer; he or she does right by them so they can retire or pass along their savings to the next generation. There is in all this a sense of responsibility that stands in contrast to what’s actually happened in the last eight years. Kay points out that Richard Whitney, then Vice President of the New York Stock Exchange went to Sing Sing after the Crash of 1929. After 2008 we sent ‘Fabulous Fab’ Tourre to the pokey. You have to wonder if we’re serious or if the fix is in.

The epitomes of probity in banking.

This should raise the question of just why all those bankers make so much money. Perhaps the first thing to realize is that the big paycheck earners are themselves a subset, a quite small subset actually, even of the finance industry. The 1% thing is real no matter how well paid your neighbor managing back office operations may be.

Kay convincingly demonstrates that funding new industries and allocating investment capital is the least part of what high financiers do. Mostly, he argues, they allow computers to trade–an activity with no real economic value in any textbook sense–and speak to what the markets think. Insider perspective on this echo chamber of questionable value is what the financial media and government types are seeking to tap into when they cozy up (some might say kowtow) to the financial bigwigs. 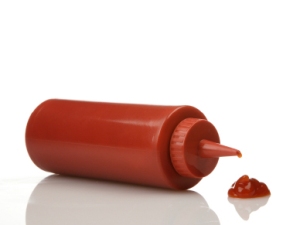 I’ll never think about Wall Street’s views on economics the way I used to.

What’s a modern economy to do? Here’s where liberals, who will agree with much of the analysis to this point, will jump ship. Conservatives, locked in the delusion of a free marketplace, reflexively hate regulation so it might be more palatable for them. Regulation, avers the professor, is the enemy because all it does is spur a race to find the way around the newest regulation. Better to hold people accountable to standards and strip them of their loot and position when they fail the trust.

Oh, it’s also time to separate the games of the investment bankers from the utility-like function and savings preservation roles of the retail banking system. No one understands these banks, levered 30 to 50 to 1 on their equity nor would the bank lend to any business so under-capitalized. Sensibly limit the ability of these guys to blow up the world says the professor instead of thinking they know more than anybody else.

Maybe that’s a pipe dream but it’s one I can embrace. After all (and this is something I learned from Professor Kay), if we don’t think differently, we’re on board with what Larry Summers called “ketchup economics.” I have too much respect for political economists to ever do that.