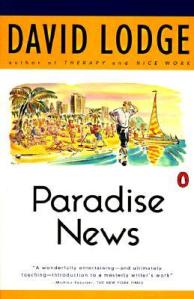 It seems appropriate to finish a book about vacation while on one. Except that the trip at the center of this book is hardly a vacation and the drive just taken to Atlanta and back was made possible by an extended disengagement from the world of work.

But enough carping. Vacation is supposed to be a happy subject and vacations to Hawaii a once-in-a-lifetime experience. So what happens when you put an agnostic, middle-aged theologian on a plane with his geriatric father and send them both from Heathrow to Honolulu on a package tour? You get one big mess, but that’s getting ahead of myself.

Bernard Walsh is the confused man at the heart of this story but you wouldn’t know that at first.  Lodge, whom I’ve never read before and know little about, plays with forms in this book, the  structure of which reminded me of The Love Boat.

You may recall that vacation-themed hour of not-worth-remembering television. Each week the ship departed on a cruise with its regular crew and a new group of  revelers. The show followed two or three, sometimes even four, couples and their light-hearted mishaps on the way to rekindling romance. 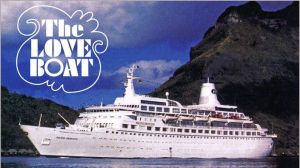 I watched too much TV in the 70s. How else can I explain seeing the same form of storytelling in this book?

Lodge similarly populates his tour with quite an array of his countrymen. Besides Walsh pere et fil you’ll meet: Roger Sheldrake, an anthropologist studying travel who inexplicably is being hosted by the tour company; Russ and Cecily, newlyweds who are not speaking because Russ’ doltish behavior was revealed at the wedding reception; Sue and Dee, friends who always vacation together; a family, with two teenagers in tow who’d rather be elsewhere; the Everthorpes, videotaping the entire experience; an older couple travelling to meet their son and his soul mate; and more.

It’s quite a crew and paying equal attention to each would result in a book the length of War and Peace. Rather quickly the Walshes take center stage which is a good thing. And while we focus on them, Lodge keeps the others in sight. Along the way he uses whatever form suits his purpose–straight narration, postcards, diary excerpts, truncated memoir, draft academic paper. It’s quite a range.

Bernard Walsh is one of the more delightfully complicated characters I’ve ever encountered. Born into a working class family of Irish immigrants living in South London, he was, early-on, the child designated for religious life. This was a very typical thing to do among a certain sort of pious Irish family (it happened in my own extended family) although, the results being mixed, I’d be surprised if the practice hadn’t died out by now. 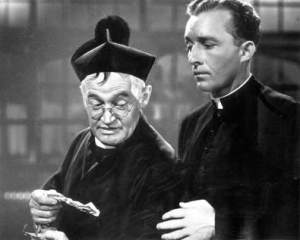 I was raised with the mistake notion that all parish priests were like Barry and Bing.

So Bernard became a priest and not a Barry Fitzgerald parish priest, either. He became a lecturer in theology at St. Ethelbert‘s seminary where he remained until its closing thrust a parish assignment upon him. Already questioning his faith and calling, a would-be convert introduces him to love which leads to his departure from the priesthood.

Bernard is now teaching, part-time, at some sort of Rube Goldberg college. Unexpectedly he receives a long-distance call from his father’s sister, Ursula. Bernard met her once, when he was a child, but she is estranged from the family and has been living in the United States since she married a Yank immediately after the War.

Marriage didn’t work out for Ursula and now she is facing her own demise. She’s dying from cancer and wants to see her brother before she passes. No excuses allowed; she’ll even pay the fares. So Bernard, taking on a role usually filled by his sister, Tess, who was unreachable, plans the trip, booking two tickets on a package tour that included a hotel although they will stay in Ursula’s apartment.

There is a family backstory that this meeting is meant to address. I won’t spoil that for you but I will say that as vacations go, everything that can go wrong does on this one, and not just for the Walshes.  But they have a particularly hard go of it starting in the airport where Mr. Walsh misplaces his passport. 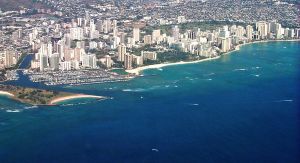 Anyone who has ever travelled with an elderly parent will appreciate Lodge’s deft treatment of the situation. It’s hard enough when roles are reversed. The elder Walsh presents his own challenges having never ventured far and certainly never by plane. Things get even more complicated when he steps off the curb and is struck by an oncoming car resulting in his hospitalization.

This could all be unbelievable but it isn’t, even when Bernard falls into an ongoing romantic assignation with the driver of the vehicle that hit his father. That’s only one of the improbabilities that somehow work in this silly tale where all those travellers keep stumbling across each other, strangers in a strange land.

Lodge’s eye for detail goes beyond the usual British/American language differences, although there’s some of that. He treats American commercialism with good humour. One example: a rack of restaurant brochures showcases a string of business names that are so familiar to an American they wouldn’t even draw notice. Strung along like a necklace they serve to highlight being in an unfamiliar place.

Years ago I saw an extensive market research study on vacationing, One point that has struck with me is that people change their lives on vacation. They get engaged. They get married. They conceive children. They decide to divorce. Bernard Walsh has such a vacation, passing through an awful lot of life stages for a forty-something year old man. Then again, he’s led a cloistered celibate life so why wouldn’t visiting paradise on earth change him. He has, after all, been dedicated, if not called, to God’s will. 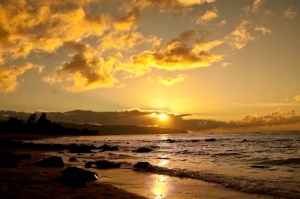 Of course there’s a sunset interlude in this tale. Just not as primal as this one since our heroes never leave Honolulu.

In the end, things work out in a way that’s not quite like life but not entirely unbelievable. Tess, arrives to save the day and winds up leaving the situation in his hands. His father and Ursula reconcile. He may or may not have a future with Yolande. The newlyweds start speaking; the couple’s son comes out to them; the anthropologist revises his working thesis. It’s all in a novel’s work.

I don’t know if David Lodge has a literary reputation. What I do know is he has a way with a tale. Maybe I’m just missing my folks. Maybe it was the familiarity of a character growing up in a family similar to mine but in another country or maybe it was the telling, but I had a grand time visiting this story about paradise.