Obsessive is not a word I typically use to describe myself. Mrs. AHC, though, has been known to voice the belief that,  despite my demonstrated entropic tendencies, I suffer from OCD.

Settling that disagreement will have to wait, at least until I finish talking about the latest Alaska volume to cross my path. You may recall that venturing to Alaska has been a long-receding dream of mine although it might be more accurately labelled a mirage.

So as time marches on and the possibility of actually setting foot in The Last Frontier diminishes, I find myself reduced to that most lamentable of creatures: the armchair traveller. Anne Tyler notwithstanding, it’s not my first destination of choice. Nor, as genres go, has travel writing ever been high on my list.

I say that even though there are more than a couple of travel books on my shelves. Admittedly, the whole Alaska thing was kick started by a book, John McPhee‘s Coming Into the  Country. But McPhee isn’t a travel writer in the strict sense. He’s a master storyteller who happens to travel and write about it. After all, he’s the guy who traveled coast-to-coast on Route 80 and produced 1200 pages or so on the geology he encountered.

Our author’s mode of travel. This is actually a photo from Canada but the ragtag group of pooches seems closer to the book than a matched set of Huskies.

I keep trying to have that first experience all over again although, more often than not, I come away disappointed. Certainly that was the case with Peter Jenkins‘ book. It’s a consequence of setting the bar so high at the outset.

Alastair Scott, comes closer than most. As writers go, Mr. Scott has an almost nominal digital footprint. So anything I say about him comes from what he tells us in the course of his tale.  And what he is is an intrepid wayfarer who hails from Scotland.

We don’t know all that when we meet him on the book’s first page. The first things we learn are that he’s a cook on a Danish freighter cruising off Greenland–a job he has no business holding–and that he’s become besotted with dog sleds. So much so that the idea of a long trip by dog sled is growing like a tapeworm in his consciousness. I can relate to that last part.

And so, off to Alaska he goes, making his way across North America mostly by hitchhiking. He heads for Fairbanks although he quickly lands a bit further on up the road in Manley Hot Springs, population 89 in 2010. This burg, located on a slough off a tributary of  the upper Yukon River, is where he sets about learning what he needs to know to undertake his journey. Scotsmen, evidently, do not learn dog sledding along with hammer throwing and caber tossing. 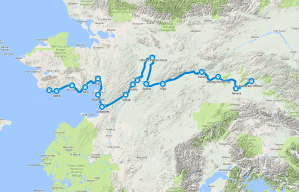 The 2017 route of the Iditarod race. Oddly, except for that Loop of Henlie between Galena and Koyukuk, it is the same route Scott took.

In the Allende post I suggested remoteness allowed for assembling a cast of mildly eccentric characters and referenced the fictional Alaskan town of Cicely as an example. There’s some of that here, but mostly these people are trying to scrape together a livelihood in an uncompromising environment.

Everyone in Alaska who isn’t a native Aleut, Iñupiat, Haida or Tlingit has come from someplace else and they’re either running towards or from something. There are plenty of characters who fit that description in these pages. Some exhibit the reticence one would expect to find yet all are willing to lend a hand. It’s the code of the bush, helping others to help themselves.

One talent  Scott shares with McPhee is that both quickly strike up relationships with the people they encounter and draw them out. Maybe that’s a gift of Scots heritage. For the reader this is a bonus–you get a real sense of the place through the people who have chosen to live there. 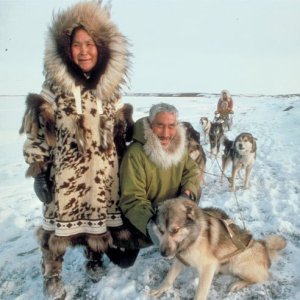 An Iñupiat couple dressed for the weather.

With Scott you also get a lot of context. Though he never really says it he did an awful lot of research about Alaska and I suspect much of it was done before he set out on his trek. Block quotes abound in this book from all sorts of historical sources.

There are even chapters, admittedly short,  stripped wholesale from Barry Lopez‘s Arctic Dreams. which was newly published at the time of this trip. I remember reading it when it came out and, more than McPhee, it may be the real wellspring of my attraction. It also strikes me that one of these Alaska books is published every 10 years or so making it an evergreen category.

The time period is worth noting. Scott undertook his journey in the last half of the 1980s. Alaska still faced the Soviet Union across the Bering Strait. USAF fighters still patrolled the skies. Cable TV, AM radio and land line telephones were the height of technology. In these books you’re always alone in the wilderness but even ensconced in civilization it’s a Spartan existence compared with the present.

I will say, many volumes into this fiftieth state fixation, that I learned more about Alaska’s history from this book than many others. One of his sources is Hudson Stuck, an Episcopal priest who got himself assigned to Alaska and made quite an impact. Stuck left behind an impressive record including being a member of the first team to ascend Denali. (Stuck refused to refer to it by the name used for almost 100 years, Mount McKinley.)

There’s much more here including  retelling the story of the 1925 diphtheria serum run. You may be familiar with that since one of the lead dogs, Balto,  became famous enough to get a statue in New York’s Central Park and be the star of a 1995 animated film. Balto could even be used in a game of Six Degrees of Kevin Bacon.

There is, also, the telling of the trip itself. I’ve given short shrift to 800 miles of back country travel pulled by dogs. Scott makes such a journey appealing without selling short the temperatures, toils or troubles of taking care of 8 dogs who were his only means of survival in sub-zero weather. The whole lot makes it to Nome in 32 days of mushing.

In an appendix Scott lists the equipment he packed. It shows how much prep work he did before setting out; no tyro could pack such a sled. An epilogue updates us on the dogs. I’m as sentimental about dogs as any American so this was a welcome addition.

When I think of Alaska the words vast and empty loom large. That’s part of the attraction.  I tell myself I’m attracted to the solitude of the 50th state, but it’s closer to the truth to say I’d feel less divorced from mankind if there were less mankind to deal with.

And so the dream persists.

One thought on “In the Largest State of the Union”