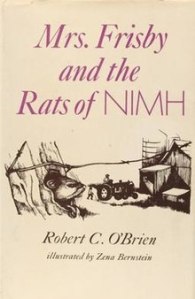 One of the great things about being a parent is revisiting the books you loved when you were a kid. I tell myself  I’m trying to decide whether a given title is age appropriate, but that’s just a rationalization.

The truth is, it’s a blast.

There are plenty of book that cross our threshold bearing the imprimatur of the educational establishment. Many of them are so nakedly didactic I wince and feel sympathy for conservatives in Kentucky (and elsewhere).

So I feel obligated to dredge up titles that taught me reading was fun, the best entertainment to be had anywhere. Completely portable and powered by sunlight, which is especially useful when your bedtime is 8 o’clock or so.

It helps, in seeking out these aging gems, to have some cover should the guardians of young minds worry that the wrong ideas are getting a hearing. In the scaring off scaredy cats department, you can’t do much better than to wave the Newberry Medal at them. 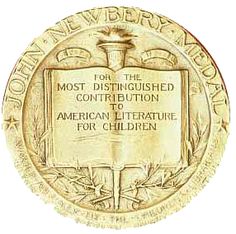 The John Newberry Medal, awarded annually by the ALA.

The Newberry is the oldest, and most prestigious, award given to the author of a  children’s book. Specifically, it recognizes “…the most distinguished contribution to American literature for children.” Okay, maybe the Caldecottt shares the same level of prestige. In both cases, the award is garlic to the vampiric bibilothecal police.

In 1972, Robert C. O’Brien was given the award for Mrs. Frisby, published the previous year. Soon afterward Mrs. King, the head children’s librarian at our local public library, who was still on the job when I worked there during my high school years, visited our school to talk about new books we should read. One of them was Mrs. Frisby, in a cover sightly altered from the one shown above. As I recall, the background was white and the Newberry medal, in gold foil, was shown. Prestige sells.

O’Brien, I recently learned, was the pseudonym of Robert Leslie Carroll Conly, a writer for National Geographic Magazine. Somewhat poetically, he died in 1973, a year after receiving the Newberry. It’s always good to go out when you’re on top.

But enough of my yakking, let’s get to the book. 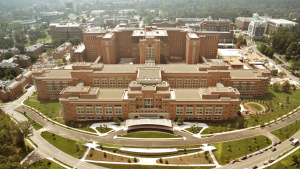 The National Institutes of Health. Presumably the Mental Health folks are somewhere inside.

Mrs. Jonathan Frisby is a widowed mouse living with her children under a stone in one of Farmer Fitzgibbon’s fields. As the tale opens, Spring is upon us but her youngest son, Timothy, has taken ill. I assure you, the attraction of this story for me does not lie in a character sharing my given name, especially one who is, paradoxically, both central and peripheral to the action.

This is one of those anthropomorphic tales where disbelief is quickly dispelled. The Frisbys live a modest, middle class life although the demise of Mr. Frisby has brought pressures upon them.

But what family wouldn’t feel such pressures? The reason Timothy’s illness is problematic is that the Frisbys are still in their winter quarters. In warmer weather they live nearer the stream, on the edge of the farm,  and avoid the hazards of plowing,  pesticides and other practices disruptive of rodent life.

So. Mrs. Frisby goes to see Mr. Ages, an esteemed mouse who seems a cross between an old-time pharmacist–the kind who mixes drugs behind the counter–and a Chinese herbalist. He has just the powder to cure Timothy, but the lad will need as long as a month to recuperate. That’s where the problem lies. 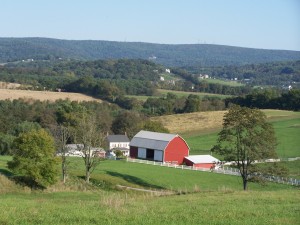 A farm in Frederick County, Maryland.
Hey, you never know.

An early thaw means plowing will start ahead of schedule and the Frisby home, while nicely situated beneath a large stone, is in prime plowing territory. If something isn’t done either Timothy will be left to die or the entire family will become mincemeat.

What’s a mother to do? She must, she learns, ask the smartest creature in the forest–the owl. In a book fraught with peril–humans, with their rodent hatred and their mice-killing cats are always close at hand–the tensest moment may be when Mrs. Frisby, potentially dinner, enters the lair of the wise bird.

I’ve leapt, of course. How did a mouse get way up in a tree let alone deep in the forest far from the farm? (Or at least far for a mouse.) She flew. Well, actually her friend, Jeremey the crow, flew her there. They’d become buddies when, at no small personal risk, Mrs. Frisby disentangled him from some tinsel that was tying him down, making him easy prey for the farm’s cat.

The owl is at first disinclined to help until he hears her name. Then he tells her to talk to the rats living under the rosebush and tell them she must be in the lee of the stone. Mrs. Frisby knows the rats–it’s hard for a mouse to miss them but she’s afeared. Nonetheless, she goes and is admitted to the rat’s world.

More so than Zena Bernstein’s illustrations, this painting by the gifted illustrator Leon P. Strapko always makes me think of this book.

Theirs is a world completely like ours. Water, electricity, machines, books, furniture, these rats have it all. Mrs. Frisby meets their leader, Nicodemus, and learns their story. Her husband, it seems, as well as Mr. Ages share a past with the rats. They are all products of experiments, though I I’m not sure that word’s ever used, at NIMH.

They are also planning to leave the farm. These rats have a dream to set up their own, separate civilization that is self-supporting, no stealing from humans required. But they stop their preparations to help Mrs. Frisby.

I’m not going to give away the ending.  In its own way, it works out. Reading it again, as an adult, I see a lot more. There’s Mrs. Frisby’s innate goodness, and the bravery a threatened mother can summon. There’s the selflessness and loyalty of the rats, and Jeremy. There are unknowing humans, a. hungry cat and a government agency that deliver their own terrors.

My brother’s death was relatively fresh when I first read this book. So I see how many of these themes resonated with the sacred little boy I was (and in many ways still am). If you know a sensitive reader aged eight to ten, I recommend the book.

P.S. There’s a 1982 animated movie of the book, The Secret of NIMH. I know I’ve seen it but it never had the impact for me that the book did.