Down and Out in Paris and London
George Orwell

Why, I wonder, in reading a book set in early 20th century London and Paris,  did I find my mind wandering ever closer to home and New York during the same era?

I’m always the first to point out that reading helps me connect things otherwise unconnected. So what I was thinking about, mostly, was Joseph Mitchell.

If you don’t know who Mitchell is, you should. A long-time staff writer at The New Yorker, Mitchell has a reputation as a writer’s writer. He was infamous for going to the office every day well into the 1980s despite having not published a single word since, I believe, 1963.

Bear with me, I’m getting back to St. George. Twenty-five years ago there was a Mitchell Renaissance which saw much of his work collected and republished. More recently, the current editors of his writing home have been tearing down his legend. In a series of articles they’ve shared excerpts of his never-gotten-anywhere-near-published memoir of growing up in North Carolina; connected the dots he never did in tracking down his most famous subject; and indicted him for committing a journalistic sin: fabricating composite characters and too-well-crafted quotes from them. 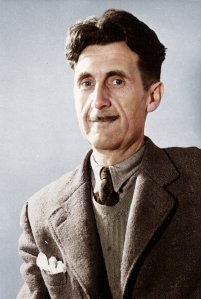 George Orwell, 1903-1950
Our Virgil in assaying metropolitan European poverty circa 1930.

Which brings me back to Down and Out. Like Mitchell, Orwell was drawn to the masses. The impoverished folks in this book fit comfortably with Orwell’s’ other pre-novel-days subjects. Coal miners. Burmese peasants. Spanish Republicans.

Down and Out, in fact, is Orwell ‘s first book-length work, published in 1933 at the heights (depths?) of the Great Depression. Quite conspicuously the title page states the book is a novel (emphasis added).

Those two words, I submit, are what has saved Mr. Blair’s shade from the scolding being administered to Mr. Mitchell’s. Because to read this recounting of personal experience with poverty is to recognize not a novel–even the almost total absence of plot won’t allow you to mistake this for some post-modern experiment in form–but the reportage of Mitchell.

We meet our unnamed, first person narrator in Paris, as his luck is turning from bad to worse. He lives in a type of accommodation that still existed in New York when I moved into the city in 1986–the SRO. Essentially, it’s a hotel room with space for a bed and not much more. I believe in England the preferred term is bedsit and, as with the Big Apple, they still existed in the 1980s.

Two things stand out in his description of his state: the squalor and the total absence of support. The latter, I suspect, is due in part to his status as a foreigner and other expatriates seem to be those he knows best. The Frenchmen and women we meet have established roles, the landlord, the café proprietor, the maitré de hotel, even the pawnbroker. 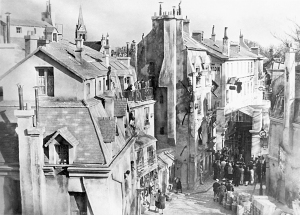 A Scene from Under the Roofs of Paris
René Clair
It’s hard to find ugly pictures of Paris.
(c) MOMA, no infringement intended.

The ex-pats are on their own. Our hero, who has been scraping by teaching English, loses his last students and starts selling his clothes in order to live. He tells us that poverty drives absolutely everything but thought of the next bill and lack of income from one’s mind.

Looking for work to survive he reconnects with an old friend, Boris, a White Russian émigré.  Boris is an old hand at getting by and so, roused to action, the pair set out to find work. Boris, a grandiose thinker and larger than life character, is holding out for the big score, a maitre de position  in a restaurant a friend and fellow exile is opening. In the meantime, they take employment at one of Paris’ better hotels.

What follows is reportorial B&B. That would be equal parts Bemelmans and Bourdain. There’s an awful lot about the workings of hotels and the grosser aspects of commercial kitchens, long, 17-hour days, and being the low man in the hierarchy. He muses that the essence of a luxury hotel is useless waste designed to make people feel good about paying too much while enriching the owners. It’s no wonder that when an opportunity presents itself in London he flees the City of Light. 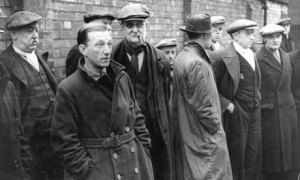 Things were at one and the same time easier and harder for our hero at home.

Home, then, to England where he is to take a position with a family that, by the time he arrives, is delayed a month. And so it’s back on the bum in a society that only seems softer because as a native, at times even a recognizable gentlemen, he can make use of support systems not terribly different from those seen in Dickens more than 50 years before.

With a month to fill it’s an endless round of mission kitchens, homeless shelters (spikes),  even an annex to a workhouse. He meets folks with trades, or at least ways of earning a penny or two, and flat-out beggars.  He again sells his clothes. And he wanders about London and the home counties trying to fill time.

This all drives to a powerful rumination but before he gets there he introduces a trick he uses in other of his books. He just stops dead in his tale and starts recounting something interesting but not necessary to moving along. In this case it’s chapter on slang, it’s origins and evolution. I think it should be mandatory reading for writers of English detective shows because their John Mortimer–approved use of rhyming slang was going by-the-by eighty-odd years ago, according to Orwell.

So, where does all this lead.  Our narrator catalogs the types of indigents with their talents and scams with beggars at the bottom of the heap, objects of “..a curious attitude that society takes towards them.” (p. 173)

Let me end with an edited quote for you to ruminate on (the whole passage is worth finding and thinking about):

Yet if one looks closely one sees that there is no essential difference between a beggar’s livelihood and that of numberless respectable people. Beggars do not work, it is said; but then,what is work? {…Begging} is a trade like any other; quite useless, of course–but, then, many reputable trades are quite useless….In practice, nobody cares if work is useful or useless, productive or parasitic; the sole thing demanded is that it be profitable. In all the modern talk about energy, efficiency, social service and the rest of it, what meaning is there except “Get money, get it legally and get a lot of it.” Money has become the grand test of virtue. (pp.173-174)