The Future of Capitalism: Facing the New Anxieties
Paul Collier 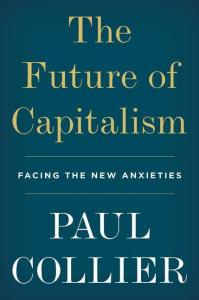 Turn with me now to serious things.

For some, the sky is falling, what with talk of 70% marginal tax rates. For others, the glorious socialist future is only a moment away.

Some of us, who can remember when things seemed less anxious, may wonder why there are only two choices. That can lead to a rabbit hole or, alternatively,  the book close at hand. For most folks, the book will be the better choice.

Paul Collier is an economist whose primary area of study is development. He is also  a professor whose credentials come from Oxford. I don’t usually dwell on credentials–an overrated form of currency subject to too much inflation– but I make an exception for economists.

In America, we think economists are physicists, until they’re wrong–then we think they’re weathermen. I’m pretty sure that’s driven by two things. The first is the headache-inducing math they apply to any social encounter that involves an exchange.

The second is that, among the social sciences, economics is the only one that seems practical to the business community. That’s why econ majors knuckle down, hoping to find a berth on the Street and make big bucks or at least  find a perch in a corporate planning department. The most ambitious among them aim for a faculty sinecure, the stage in Stockholm and a column in the Times.

That may all just be evidence of a cultural predilection for commerce. British economists, by comparison, are reared in a different tradition. I’m sure they have plenty of maths. But they also seem far better grounded in political economy.

Before you get to the scrips, though, you have to reach a diagnosis. That’s the bigger part of the book. And the part most likely to find some readers discarding it as rubbish. Collier’s a realist and expects that, but he makes his diagnosis anyway, presenting a reasonably strong case for what’s ailing us.

We have lost sight, suggests Collier, of the purpose of an economy. That’s the ethical imperative to improve the lives of the greatest number of people.  Instead we’ve seen rising inequality in even the wealthiest countries while aggregate conditions improve on a global basis. Moreover, this is a recent development.

Margaret Thatcher and Ronald Reagan in 1983, The couple the bands of my youth loved to hate.
(AP Photo/White House)

In Collier’s telling WWII changed everything, but just for a while. The War and its aftermath brought everyone together in a common purpose. No one was claiming  that a 91% tax bracket during the war, or 70% thereafter, was the road to ruin. The wealthy kept a little less, the middle expanded and, boom, there it is, the ‘great again’ period that Trump supporters and Brexiteers long for.

Around about 1970 things began to change and by the end of that decade we were well on our way to the current state of things. You can asess a lot of blame for this. Some would pick Reagan, some Thatcher. My own nominee would be Milton Friedman.  Putting a face on it is immaterial. Here we are, deep in what Robert Frank and Phillip Cook called The Winner Take All Society.

What changed? In a word, ethics. Most people who study economics get their economics from textbooks. Collier notes that few read The Wealth of Nations and fewer still  the foundational work that preceded it, The Theory of Moral Sentiments.

For me this argument is mother’s milk. I’ve been saying for decades that capitalism is a moral system, not an economic one. You don’t need any of the moral elements of the West–rule of law, freedom of choice, primacy of the individual–to have a thriving market economy. Just look at China.

In a measured tone, steering well clear of stridency, Collier works his way through schools of thought long-held in abeyance. One example: he takes on the phenomenon of the metropolis, a useful way to think about the concentration of population and economic wealth.  Conceptually, it works at provincial, national or global scale. 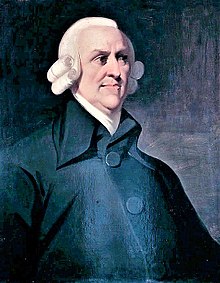 Adam Smith
1723-1790
The Enlightenment figure most assuredly NOT considered by the Founding Fathers.

Collier allows that concentration–proximity and density–allow for greater specialization, productivity and innovation. That explains why a starting IP lawyer in town often makes more than an established practitioner in the hinterlands: there’s greater value. Where, Collier asks, does all that value come from?

From all these striving professionals, of course, who, to be fair, do capture a lot of the added value in the form of higher salaries and big bonuses.  All that cash proves irresistible to landlords, so rents rise and a cycle commences.  We all know this. What we’ve forgotten, says Collier, is that the value of the metropolis comes from the agglomeration of talent. Landlords take more of the increased value, in the form of higher rents, than is justifiable.

In economic parlance that money the landlord takes is an economic rent, because it is unrelated to the productive labor that creates value. I can imagine one Twitter-obsessed landlord who would not be happy with this analysis. Nor would he welcome dusting off Henry George and the notion of capturing those rents as taxes to be invested in struggling areas.

We’re near prescription land now and although Collier says he’s being pragmatic, conservative readers  will scream he’s liberal.  I think we need to be honest. We’ve been trying this less government, lower taxes, profit maximization approach for almost four decades and things are demonstrably worse. Why should anyone believe a different approach will lead to anything more than disgruntlement among the relatively small group of people who have benefited excessively from the current situation?

Collier’s plan draws from all over. He notes that Anglo-American university education sets the global standard even as both societies lag at the pre-, elementary and secondary levels. Why not borrow the approach that works so well at those levels in France? 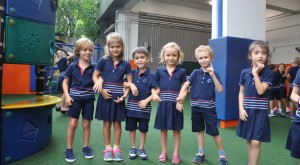 Anyone who’s seen French kids walking to school in uniform may have wondered if we’re missing a better way.

Why must everyone go to college? Why not, as in Germany, align the needs of employers with the community college system and create apprenticeships for actual jobs? Despite five weeks of vacation and lots of regulation, Germany thrives on manufacturing as American businessmen whine about an incentive-sapping state. And why must we ignore the periphery instead of selectively seeding institutions that will attract employers to be near them?

Let’s not spare sacred cows either. Why must we accept shuttering innovative social programs because they cut across bureaucratic silos? That all but guarantees the major beneficiaries will be the holders of government jobs.

Is Collier perfectly sensible? No, is anyone? He is, for example, a bit too glib about how he and his fellow faculty hold a claim on future University students. There actually is an ethical dilemma here and to shrug it off with a word about the services of fine barristers strikes an odd note in a book striving for ethical probity.

Overall, though, the prescriptions sound pragmatic to me. And at this point, we could use a bit less absolutism and a bit more experimentation.

It’s been quite. week or two for the over-privileged. For your consideration and amusement:

1. Rutger Bregman  explains the history of US tax rates to the Davos audience.

2. Mashable story indicates why ethics is a hard sell to Millenials: 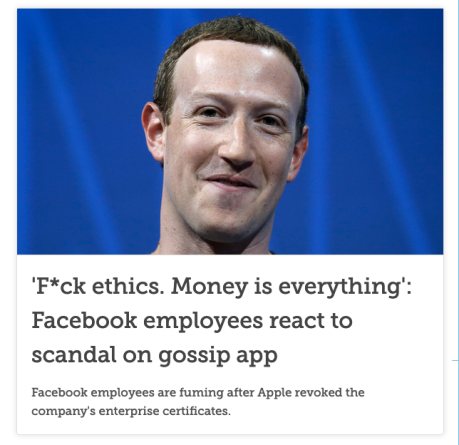