The idea that any man-made object, let alone one made of paper and grease,  could survive the semi-tropical humidity of the Sunshine State for more than three decades seems far-fetched. Luckily, all I asked it to do was endure seven moves within a 50-mile radius.

Why that should be will have to remain a mystery. All I know is that even during the years when the only fiction I seemed to read was mysteries, this one remained untouched.

I’d like to say it was worth the wait, but what book could stand up to the hype like that? In a way, that’s not a fair thing to do to an author or his (in this case) work.

What we have here is a story combining familiar elements. A procedural, the tale is kicked off when Edwina Talbott, a successful real estate broker in one of Florida‘s tonier oceanfront communities approaches Fred Carver with a problem.

Carver– throughout he’s mostly addressed by his surname, even by his client–is a former police officer who, somewhat haphazardly, has hung his shamus shingle in the aftermath of a career-ending shot to his knee administered by a small-time thief enamored, evidently, of IRA practice. He lives alone, at the beach, where he’s nursing his wounded knee and psyche. His family is gone and whether the dissolution of his marriage occurred before or after his injury didn’t stick in my brain, if it was mentioned at all. His son, daughter and occasionally ex-wife sometimes intrude on Carver’s thoughts, though they have moved to St. Louis.

Our hero lives alone on the beach in a cottage perhaps smaller and more remote than this.

Like the blues, crime fiction works within an informal set of rules and the heroes come in many flavors, but they have to be recognizable. They can be great deducers. They can be wrapped in mystery themselves. They can crack wise. They can be quick with a fist. In some way, though, they are always a little incomplete. Maybe that’s why they’re driven to do what they do, though I can’t recall another hero who is bald, gray-haired and lame, let alone named Fred.

Carver raises the stakes a bit in the incomplete department since he’s crippled. I know it’s considered impolite to use that word these days, but Carver’s lame leg isn’t a genetic defect. He’s not “differently-abled,” he’s handicapped, his leg forever frozen at a 30-degree angle, walking with the aid of a cane in his forties. With Carver, the brokenness and the manner in which it sets him apart is apparent from the start.

And it is the start. In locating the cover art  for this post, I saw this book referred to as “Fred Carver #1.” Lo and behold, it turns out that John Lutz, like quite a few other crime writers, has developed a number of series built around a character. It’s probably testimony to how much crime fiction exists that, despite decades of prowling libraries, used bookstores, the Barnes & Noble Sales Annex, thrift stores and even The Mysterious Bookshop, that this is the only title I’ve ever seen by Lutz. 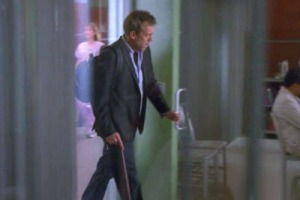 Dr. House was a graying hero with a cane and a demeanor similarly sour to Carver’s. Having your mobility taken will do that.

That’s odder, still, since Lutz penned the novel that the film Single White Female was based on, which I saw when it was released. Not that I seek out the novels behind the movies. That was in the middle of Bridget Fonda‘s most active working period and I had a wicked crush. You could have gotten me to watch her make a ham sandwich, but I digress.

Edwina confronts Carver as he’s engaged in his daily swim, physical therapy that has also become central to Carver rebuilding his mental health. A former boss, Lt.  Desoto of the Orlando Police Department, has referred her to him. She wants Carver to find Willis Davis, her lover, who disappeared suddenly.

The police believe his disappearance was most probably suicide and they have other things to do. But Ms. Talbott has means and DeSoto is worried that Carver is wasting away on the beach, and so a referral is made. DeSoto’s particular task is to serve as Carver’s sounding board, information supplier and guardian angel.

Luxury real estate in Florida tends to look alike, but this is the area I think Edwina works in.

This is a good place to note an inconsistency  that nags me. Florida is mostly a peninsula. So it’s relatively easy, in the space of a couple of hours, to go from the Atlantic to the Gulf of Mexico. The interior–and I’d submit that most people’s idea of interior Florida is Disney World–is even closer.

Still, no good explanation is ever offered for why a coastal realtor would approach the police in a city an hour or more away with a missing person complaint. Even in Florida, jurisdictions have boundaries.

Geography is fungible in this book. The last time I drove down US 441, Gainesville was north of Ocala. Here, to throw in a plot twist and distract us from the real solution to the crime, it’s a quick jaunt from Orlando PD headquarters. I’m guessing at the other locales because they have artfully disguised place names. But Del Moray, where Edwina lives and works, seems to be in the Palm Coast area, and Solarville strikes me as being somewhere near Sebring.

I’m a little unusual in my geographic fixation, but the distances seem to work. The names also caught my eye. I suppose that DeSoto is more subtle than DeLeon, but not by much. And really, Del Moray for a luxury community? Is there something eel-like about the wealthy; they barely figure in this tale. 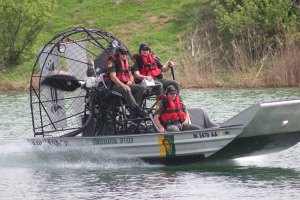 You have the Everglades, you have airboats, though this one is in Indiana!

I’ve avoided saying much about the tale itself because it would be too easy to give away the ending, or at least a clear path to it. Here’s what I can say. The plot moves along briskly. The major characters are more than sketches without being burdened by too much backstory. The minor characters are plausible enough for it all to come together.

You may, in fact, be better off staying in that territory. Though not a terrible book, I feel no compulsion to seek out another in the series or by the author.

One thought on “Goin’ Down to the Swamp”