A Son at the Front
(Four Novels of the 1920s, A Library of America Volume)
Edith Wharton

One could argue that World War I was the first modern war. There’s a case to be made for the wars of the mid-19th century, but their horrors seem more of scale. For something never seen before, it’s hard to beat “the war to end all wars.”

Edith Wharton was living in Paris when the war broke out in August 1914. She’d taken up ex-pat status a few years earlier when her marriage deteriorated. Now, she was on her own, on the eve of turning fifty. Like the focus of this story, John Compton, she was about to start on her vacation when the declarations started flying, soon to be followed by bullets.

As always, Wharton’s focus is on the class she knows best, the very wealthy,  although in this tale the plutocrats are, like her, expatriated Americans. She is also focused on what became known during that conflict as the home front.

I could easily veer off course here, because what I described at the outset as a modern war is a very different state of affairs from the post-modern wars of this century. I hadn’t actually considered that until I read this book, with its intense look at one family as they encounter war’s impact first hand.

John Campton is an artist, a portraitist whose success has come later in life. He lives in his studio in Montmartre, thrifty even as he enjoys success because the lessons learned when he sacrificed all for art were hard-earned and are not soon forgotten. Compton has a son, George, from his only, long-dissolved marriage. George’s mother, Julia, has remarried. Anderson Brant is the opposite of Compton–a banker so successful his name is on the door and the government bends to his will.

As our tale opens, the only war in evidence is the one between Compton and the Brants. (Wharton’s convention is to most always refer to the principal males by their surnames, a lead which I’ll follow.) In the manner of all such family dramas, the objective is dominating the affections of George. Compton is intent on “getting his son back,” a loss he attributes to his inability to compete with the Brants in showering material well-being on the lad.

I say lad though George is, in reality, already in his early twenties, finished with his schooling and thoroughly convalecesed from a bout with tuberculosis. It was, in fact, a portrait of George that caught the attention of the art critics and then the wallets of those who would have their portraits painted by such a master. So, in a way, Compton owes his success to his son, turning the usual pattern on its ear. 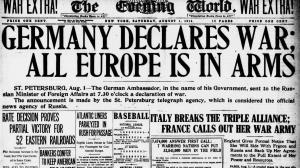 What a difference a day makes. Just like that, things are never the same again.

Compton’s plan is an extended vacation during which the father-son bonding will be so meaningful that he need never again wonder about the division of George’s attention and affections again. The festivities will begin even before the trip, with Compton taking a suite in the Crillon, hard by the Place de la Concorde, so that there will not be a visible degree of difference in the niceties of life to which George has become accustomed.

Then fate, in the form of war with Germany, intrudes, upending all manner of plans, instantly freezing civilian travel and slowing commerce to a crawl. This is where things get dicey. George, though the child of Americans, was born in France and, just as it works in the US, is a birthright citizen. That means he can be, and is, mobilized for the war effort, a fact neither Compton nor his ex-wife can accept. “You’re mad—this is not our war”

What ensues is the uncertainty, banality and terror of war for the folks left at home, although the folks at home are quite different than (perhaps) you and (definitely) me. Almost immediately, Compton and the Brants are locked in a dance. Can they keep George out of it? Can they ensure safe duty? Will the fears and personal emotional needs of divorced adults overwhelm their desire to protect their child?

The reserves called up, August 1914. Amazingly, despite two World Wars that street looks much the same today.

War, of course, changes everything. Compton, never a joiner, suddenly finds himself the honorary chair of a war charity managed by an ex-pat friend of George’s. Julia takes up volunteer nursing, though, in the way of the especially rich,  there’s a chauffered car and villas by storied seaside redoubts like Deauville and Biarritz. Brant continues to bank because, well, fish gotta swim.

Inexorably, the war begins to intrude on our principals. Promising young artists die of their wounds. Only sons, grandsons and nephews of minor characters are killed. Still, George is okay until his mother receives a puzzling note about where to send his mail. Has he been sent to the front? What is his status? No one can tell.

Until they can, because George turns up wounded, approaching death, and Brant arranges to drive Compton to see his son. This chauffered trip softens Compton’s position toward Brant and George survives, but nothing else does. Perceptions are not just altered, but shredded as George’s parents learn that he volunteered for a forward position and that he has been having an affair with a member of their set.

WWI was marked by trench warfare, a cold, muddy battle for inches.

George survives and returns to Paris to recover. The Brants and Compton conspire with his love interest and he accepts a staff position at the rear.

But it can’t last. From the start, the adults are the reluctant warriors and the young men “…have to be part of this thing.” If, like me, you grew up during the Vietnam War era, that may seem upside down.

George returns to the front and all the scheming in the world can’t prevent a second wounding. World War I may have been modern but it wasn’t exactly mobile. Troops positioned themselves in long open trenches open to the weather, artillery and poison gases, going ‘over the top’ to advance incredibly short distances. Battles lasted months and millions could die in them. A generation was wiped out in less than half a decade. It was, indeed, total war, enmeshing the entire society.

The Great War spawned a new kind of anti-war art, the most famous example of which is Erich Marie Remarque‘s All Quiet on the Western Front. In a way, I think this novel, though published earlier,  is Wharton’s contribution to that genre. I can’t imagine reading it and not realizing just how fragile our realities are and how they can be repeatedly assaulted without a care as to whether, alone or together, we can survive.