Back When We Were Grownups
Anne Tyler

Allow me to hazard a guess: novels centered on middle-aged females don’t typically set one to thinking about John Lennon and the Human Beat Box.

The latter is, perhaps, more understandable since Master AHC has spent the past few weeks referring to our author as “Ann E. Tyler.”  That silent ‘e’ thing doesn’t come easy and matters are not helped by my mom’s middle name containing no such terminal vowel. Still, every time he said it I thought of Doug E.

It was a toss-up, though, as to whether the post should borrow its title from Lennon or Dylan. The bard of Hibbing won, if only because Roger McGuinn‘s voice ran through my head as I spent time with Rebecca Davitch, neé Holmes. When we meet Rebecca she is in her mid-fifties, living a hard-earned middle-class life in what might be mid-town Baltimore, in the middle of a family that might be more properly referred to as a brood or a clan depending on your mood and temperament. The year is 1999.

This is familiar ground for Tyler, whose work focuses on ordinary people in an ordinary place. That’s not a dis on Baltimore. Though in recent years I’ve typically driven by or ridden through, I visited the city as a child and even had a Boog Powell obsession for a year or so. It’s just that, as a working port city, Baltimore doesn’t share in the glamour on display in financial and political burgs just up and down the coast. In that way, it’s more like everyplace else.

Much of this book reminded me of spaces much like this.

Rebecca, too, is like a lot of people. Or at least the type of people I think read Anne Tyler novels. As the book opens we meet the extended Davitch family at a picnic held to celebrate the engagement of one of Rebecca’s step-daughters, NoNo. She is, we’re told, a woman who discovered she’d turned into the wrong person. Indeed, the picnic and first chapter end with Rebecca thinking “How did I become this person who’s not really me?”

It’s the great question of one’s fifties, isn’t it? For a very long time, you can distract yourself, pretending school was just a couple of years ago and that you’re still the same person who howled at the moon in reckless abandon. The monthly parade of bills and obligations, the birth and growth of the next generation, the accidents and incidents that interrupt daily life, but in reality are really indistinguishable from the warp and woof of it, they just creep up on you. Your real life, the real you,  is still there, waiting for you to reclaim it.

Maybe that isn’t everyone. But it is Rebecca. She leaves the picnic and dreams about an alternate reality, a son she never had. A task-oriented person, she sets out to find that lost self and discover what might have happened. 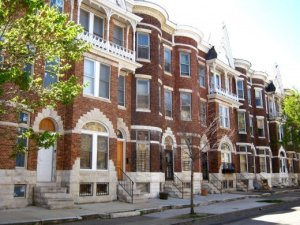 Baltimore row houses, a fascinating subject on their own. Click the photo to visit Dolores Monet’s great site about all things Baltimore.

Along the way, we find out what really did happen. I always say, everyone has a story and we should never assume the person in front of us tells the entire tale. Rebecca has one. A small-town country girl, her life course seemed certain. She grew up. She attended a nearby college with her high school sweetheart, Will Allenby.  They’d both pursue advanced degrees, settling into a comfortable existence as married academics, he teaching physics, she history. They’d raise kids and age together.

Then she attended an engagement party, alone, and met Joe Davitch. Or, rather, Joe made sure he met her. “I see you’re having a wonderful time,” he says, encountering her at a party. It’s an ironic start. Rebecca fancies herself a wallflower, a bit of a naif,  and Joe, eleven years older,  runs the family business, the Open Arms party space. The Davitches have managed to turn the first floor of their 19th-century-row house, replete with period details, into a cozy catering hall. Like the rest of the Davitches, Joe claims not to be a people person. It’s a family complaint, belied by the incessant gathering and celebrating they do among themselves.

Joe ardently pursues Rebecca and within weeks her life is upended and she is a married woman with three stepdaughters, helping run the family business. The girls’ mother decamped to pursue a singing career and you can’t help but wonder if Joe was looking to offload the responsibility of raising three girls. Four, actually, since he and Rebecca add a daughter of their own.

Probably not what a party looked like in 1999, though the interior looks right.

But Joe is no longer in the picture, having died (was it at his own hand?) young, younger than Rebecca is now. She’s become the glue of the Davitch family, maintaining the building, counseling the grown daughters (a crew I had trouble keeping straight because everyone has a nickname and not a proper one; even Rebecca’s own daughter, Minerva, answers to Min Foo), booking the parties, maintaining the traditions, and acting caretaker to Poppy, the 99-year old patriarch of the bunch.

Rebecca sets out to find the life she walked away from. She tracks down Will who is in his own state of dismay. Will they rekindle their long-ago romance? It’ll be a struggle: “You broke my heart” he tells her.

It all sounds kind of cliché. It is all kinds of cliché. Yet I didn’t disbelieve it. When my life turned upside down, after I’d isolated myself from many of my friends, I reached all the way back to start rebuilding. If you’re going to pursue understanding “How did I get here?” you need a starting point.

Despite the fairy tale beginning (“Once upon a time…” are the novel’s first words), Tyler doesn’t write fairy tales. Rebecca’s life may be messy, and it may not be the one she’d envisioned for herself. But it’s rich and full and in its own way purposeful. None of that really helps Rebecca, she can’t really comprehend that, and her funk descends with the year into what is recognizably depression.

I guess these are becoming a more frequent sight.

Fortunately, she has a business to run and the big event for December is homegrown, so important that it’s being held on the actual date, which is a Saturday, a day reserved for paying customers and on which family celebrations never occur. But it’s Poppy’s 100th birthday and that’s momentous enough to warrant the party he wants.

It’s a big bash. Rebecca’s mother and Aunt attend, along with tradesman and other friends, as well as the entire Davitch clan. Rebecca is still on edge and a video of old home movies, in which she appears but is uncredited, and an offhand remark set her to tumbling.

Meanwhile, the birthday boy is having the last word. At an earlier point, I can’t find it exactly, Poppy tells Rebecca he used to tell Joe that life was what happened, not what you planned. As Rebecca tries to pull herself together Poppy is thanking his guests, responding to their toast. He does so by recounting his day, in minute detail, the way so many elderly people do.

The pleasure he finds in the most mundane things (solitaire–“so solitary;” a p.b.j. sandwich–“so satisfying;” cool white sheets–“a nest the exact same shape as your body;” a freshly laundered shirt–“that crackly feel”) is, I think, a metaphor about the choices we all face.

Why wait until we’re a hundred to understand that?