One Flew Over the Cuckoo’s Nest
Ken Kesey 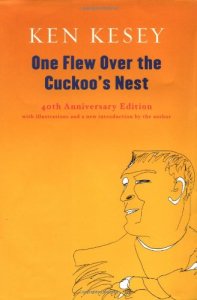 This is not my first encounter with this book. The classics, the things you’re supposed to read when you’re young because you’ll never take the time to read them later in life, those I avoid until they turn up in this space.

Kesey, though,  suffers from the opposite problem with me. There he is,  smack dab in the middle of the great project of my youth: reading everything that was published in and about the 60s because they sure as hell were affecting my life in the 70s and 80s. Dickstein? Yup, he’s in there. Thompson? You’re kidding, right? He did write the book on the Angels. Wolfe? He wrote the book on Kesey.

Even if there hadn’t been a Miloš Forman movie that won 5 Academy Awards I’d have been covered.

The movie, though, creates a problem.  Despite the place it holds in the hearts of cinéastes, the visual tale all but completely obscures the underlying novel. Appearing as it did in the mid-1970s, with the tumult of the previous decade not far behind and a whole host of new experiences for Americans emerging daily, the movie took on a life of its own. Propelled by Jack Nicholson‘s performance, the battle at the heart of the tale stood in for all the failures of the institutions around us. 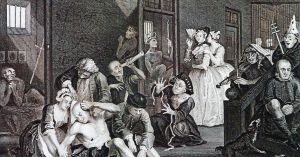 Ever since Bethlem Royal Hospital opened in 1274, locking folks up to avoid bedlam has been a-ok.

I guess that can be forgiven. Institutions were failing left and right. Though I was just a kid I can remember the mood of my parents and their friends. They really felt everything they’d worked for was falling apart and the people they trusted to do something had screwed everything up beyond belief. At a fundamental level, it’s not terribly different from the way many Americans feel today.

The novel, I submit, is a different beast written at a different time. Though it’s possible to read it as a work of social criticism–Upton Sinclair updated for mid-century America–I’m not sure that’s the point. A departed friend once told me he was reading one of my favorite novels from a psychological perspective. That’s the way to approach this book, I think.

Just take a look at Randle Patrick  McMurphy. He’s not a man in a gray flannel suit. He’s not a dharma bum seeking enlightenment, He’s not a  denizen of Cheever country acting out against his environment. He’s a small-time recidivist criminal who did his stint in the Army during the Korean War. Since then he’s been in and out of prison for any number of non-capital crimes.

When we first meet him, he is, in fact, still a prisoner though he’s being turned over to the care of others. Always quick to see an angle, McMurphy is tired of prison and he’s found a cushier way to finish out his sentence. In the manner of the military’s section 8, he’s gotten himself declared mentally unstable and unfit for the general prison population. Consequently, he’ll now reside in one of Oregon‘s state mental hospitals. 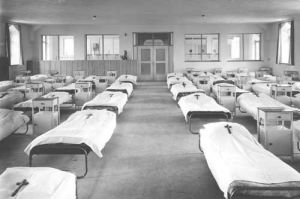 A psych-ward in the 1950s would have looked like this, tho a state hospital probably wouldn’t distribute crucifixes.

McMurphy’s been assigned to a ward that’s under the daytime supervision of Nurse Ratched. There are other nurses. There’s a night staff of orderlies, a day staff of technicians, there’s a doctor in the mix and even other wards. But McMurphy’s lucked into something much worse than anticipated. Ratched runs the ward as though it were a penal colony and for some of the inhabitants, the self-committed,  that’s exactly what it is.

But I’m getting ahead of myself. McMurphy has one way of operating and it’s to test limits over and over. He’s a master manipulator, adept at finding and leveraging weaknesses of friend and foe alike. He’s relentless and quite astute in assessing people. Almost from the start, he recognizes that he and Ratched are destined to wage an epic battle. It’s one he intends to win.

And so he sets about his work. Ratched is quite his match. The staff is terrified of her. The ward residents are terrified of her. Even the doctor is terrified of her. She seems to know everything that is going on, including things that may be thought of but not spoken. She is not above–actually, she seems to relish–using the dynamics of group therapy sessions to humiliate, emasculate and control her charges. (I failed to mention the obvious. The ward, like prison and the military at that time, is an all-male total institution.)

McMurphy will have none of this. He works the room, a population divided into Acutes and Chronics . The Chronics are the truly lost, long-ago untethered from reality, locked in a carapace of mental illness and powerful pharmaceuticals. They are “…the culls of the Combine’s product …Walkers…Wheelers….and Vegetables.” It’s the ambulatory Acute population whose support McMurphy craves and obtains. 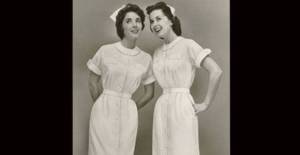 Before scrubs, nurses’ uniforms could elicit unwanted attention. Or at least that’s my explanation for the fetish.

They gain from the deal, too. To a man, they know Ratched is not happy at the state of affairs. But the TV rules are changed and they see the World Series, though they normally would not. They play and gamble in the day room and in a de facto casino McMurphy runs. They go on a field trip, a raucous fishing expedition with working girls and a stolen boat.

Every McMurphy victory is temporary as Ratched parries his moves and retaliates as a good institutionalist would. At one point McMurphy is removed to another ward where he sees that the one he’s assigned to is singular. Again and again, he’s returned until, after a series of electroshock treatments, he throws a party in the hospital after hours. There are working girls again. And alcohol. And the whole thing is supposed to culminate in McMurphy’s escape.

Except he doesn’t and in the aftermath the most vulnerable person on the ward kills himself, an event Ratched quickly blames on McMurphy. Their confrontation is violent, tinged with sexual menace and, in the long-run, deadly. McMurphy is lobotomized before help arrives.

It’s too easy to accept this as a tale of social oppression. In the end, McMurphy does this to himself. He decides to take a nap instead of going while the getting is good. Our narrator, Chief Broom, a native American believed to be a deaf-mute, realizes this. Actually, he realizes more about what is going on than our chief protagonists. I’m not certain a mental patient ever narrated a novel prior to this, but it seems appropriate here. 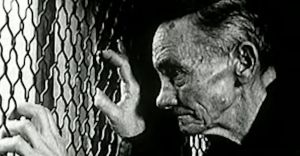 Did our hero simply swap a real prison for one of his own making?

I think that’s because for all their stark differences McMurphy and Ratched are each incomplete because each is just one-third of a whole. Kesey wrote this book after working at a mental hospital at the height of Freudian influence and i think it shows.

McMurphy is pure id, and if his actions don’t betray that maybe his initials (RPM), that lust-suggesting surname and red hair do. Nurse Ratched, all starched uniforms and foundation garments, her surname-only identity suggesting the tightening of bolts, is the embodiment of the superego. I suppose that’s why Chief, the virtually speechless narrator, a Walker at the outset, is left to sew the bits together and culminate the drama.

In case it isn’t clear, it really is a great read. I don’t know if I’m right about the psychology. I’m not sure it matters if I am. But it’s worth your time to read or, as I did, read again.