The Legacy of the Civil War: Meditations on the Centennial
Robert Penn Warren 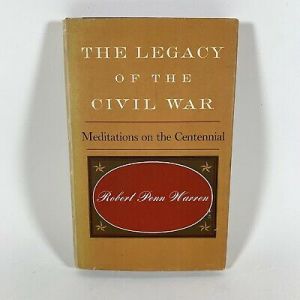 ately, I’ve found myself thinking it’s time to bone up on the 1850s. In more sober moments I think I should venture even further back. I mean, all those easy-to-confuse Presidents in between Van Buren and Buchanan got up to something, didn’t they?

Premonitions of civil unrest aside, I’m also forever looking for band-aids to slap over the gaps in my understanding.  If I haven’t said so before, now’s as good a time as any to admit I’m fairly weak on the Civil War and the decades just before it. The events of the prior century– the struggle, both intellectual and martial, for independence–have always seized my imagination more.

I suppose, then, that in acquiring the above volume I was trying to find a quick corrective. I probably also thought I could cross the author off my must-reads list. Short cuts don’t have to be pretty, just effective. Which brings me back to where I started.  This book could well be one of those cut-offs that sends me back to the highways and byways I really need to spend more time on.

How about a little context? Warren published this book in 1961, the Vintage paperback seen above and literally resting to my right, was first printed in 1964. It’s hard to remember now, but that’s the centennial of the bloodiest war in US history. Despite the contemporaneous  Civil Rights Movement, the centennial was a cultural moment and it’s worth breaking my format to illustrate that even Peanuts took note.

I first saw this is an anthology published in the 1970s.
Copyright owned by the Estate of Charles M. Schulz. No infringement intended.

It would be easy to think this was an instant book. The paper is cheap, browned and oxidized now in the way of old books, “foxed” as the antiquarian sellers like to describe it. The leading is enormous and the margins might be, too, if the whole trim wasn’t off, creating a gutter as wide as the I-5 freeway. It barely fills the 109 pages allotted to the text, the balance of the signatures given over to listing the publisher’s backlist.

Do former Poet Laureates write instant books? That isn’t even the right question. Would they write them? Or, having agreed to, would they discover they can’t just phone it in? I’ve no answers beyond those provided by the book itself, which suggests that unlike me, Robert Penn Warren doesn’t cut corners. 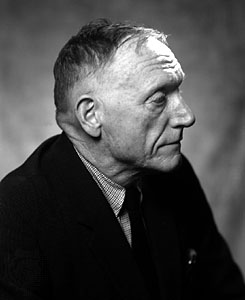 If you click on the image of the book at the top of this post, you’ll come to a page that describes it as Warren’s ‘study’ of changes wrought by the Civil War.  I take issue with that choice of noun. Though Warren references plenty of historians and historical sources, it’s a disservice to historical scholarship to cast it as such. I’d be much more comfortable using the word ruminations but our author is a poet and my rule is to never argue with a poet’s word choice.

So meditations it is, which may strike some as an unusual word to apply to thinking about a war that may have claimed 750,000 lives and shattered a generation. But maybe it isn’t. Maybe we need to just sit with that idea, rather than distract ourselves with tales of the Wilmot Proviso and the development of modern, industrialized warfare. Maybe we should wonder how such things happen, as Warren, quoting Gide, suggests.

It’s in this sense that Warren offers guidance I find applicable to today. We all know the Civil War was about slavery. We all know that Abolitionism, as a movement, seemed to arrive in the 1830s. But the leap from an outraged newspaper to armed conflict seems improbable. Was it?

Though Warren begins by discussing the Southerners, his most trenchant insights are saved for the intellectual cream of the north. The Transcendentalists, in particular, come in for particular scorn, though that word is my interpretation. Decide for yourself if Warren finds them praiseworthy:

“The Transcendentalists…, were men who in a period of social change, had lost what they took to be their natural and deserved role. … Having lost access to power and importance in the world of affairs, these men repudiated all the institutions in which power is manifested–church, state, family, law and business.”  (pp.26-27)

There’s many a contemporary conservative critic who would nod along, at least in part, with that passage. But the Abolitionists fare worse. Being on the “morally correct “side, the abolitionists tend to take absolute positions rooted, says Warren, in a fondness for either higher law or legalism.  Neither is easy to live with. When a man is “privy to  God’s will he cannot long brook argument.” (p.20)  Legalists fall in love with what Warren tells us Harold Laski called “the fallacy of abstraction.” (p. 30)

Against these absolutes Warren contrasts Lincoln‘s words and deeds. He makes a strong case that Lincoln embodied pragmatism long before William James got around to codifying it. And he seems, at least to this reader, to find that the least objectionable course.

What of the war’s aftermath a hundred years on? Warren proffers two viewpoints, each of which still has adherents and each of which allows those holding them to oversimplify and exonerate their side.

The South, he says, has adopted ‘The Great Alibi, which “explains, condones and transmutes everything.” (p. 54) The result: “Since the situation is given by  History, the Southerner therefore is guiltless; is, in fact, an innocent victim of a cosmic conspiracy. ” (pp. 55-56)

The Treasury of Virtue, which the North has hoarded. is “equally unlovely.” It creates a situation in which “…the Northerner…feels redeemed by history, automatically redeemed.” (p. 59) That allows a retelling of the War absent the many ugly, contradictory facts that muddy the narrative with the twin impediments of truth and fact. “When one is happy in forgetfulness, facts get forgotten.” (p. 60)

Maybe you can see why I found this book so pertinent to our current situation. I admit  I spend a lot of time reading data-based social science, like this fine example,  in an effort to understand where we are now. Somehow quantifying the unlikable makes it easier for me to deal with.

That’s my own weakness. I still recognize that closely read and tightly reasoned historical thinking packs a wallop.

And I recognize the value in taking that punch.