The first street I lived on in the Bronx ran parallel to one of the longer ones in the borough. Each was named for a luminary. Mine was named after the shipbuilder William Henry Webb, whose Institute of Naval Architecture once sat at the foot of it before decamping, as my family did a few years later, for Long Island.

The longer lane, from which mine broke off and later ran back into, was Sedgwick Avenue. Starting at the Harlem River it stretches north until Van Cortlandt Park keeps it from running on into the next county. It’s named for one of America’s earliest families, the Sedgwicks. Their seat, to borrow a term from their British forebears, is Stockbridge, Massachusetts.

That brings us to our present author, a native of that town and daughter of its patriarch, Theodore Sedgwick. While our attention must narrow, I’d suggest to anyone interested in learning more about the family to seek out  Edie: An American Biography, the 1982 book by George Plimpton and Jean Stein. While that book’s about a more recent and notorious Sedgwick, it establishes the family’s history and rather unique perspective on things.

The Webb Academy in a pre-apartment house Bronx, bound on one side by Sedgwick Avenue.

I was unaware of Catherine Maria Sedgwick‘s existence until this book appeared on the local library’s sale shelf. The black spine and bird icon marked it as a member of the Penguin Classics line and I always like to have an editorial staff save me the bother of seeking out and identifying books worth reading. Sedgwick, it turns out, was a woman who chose to remain unwed and who earned her living as a writer. Her reputation is rooted in domestic fiction, a subgenre of the sentimental novel.

This is a good place for a digression that applies to such works, which evidently focus almost completely on female protagonists. I dabble in an ongoing Twitter conversation about literature and many of the most prolific commentators express horror at current trends in the academy. I profess only second-hand knowledge of these matters but if I follow the argument it’s that works of beauty and eternal truths are being jettisoned from entire realms of study, replaced by books deemed to deliver a set of truths more relevant to our times.

Such misgivings appear misplaced to me and the alternate name for this sub-genre provides an instructive piece of evidence. Works of domestic fiction are also referred to as conduct novels. They trace their lineage to conduct books, which have existed since the Middle Ages. While I’ve no fault with the works and writers the Twitterati clamor for preserving, I’ve no truck with the notion that art must never be nakedly didactic. It has been so from the start. 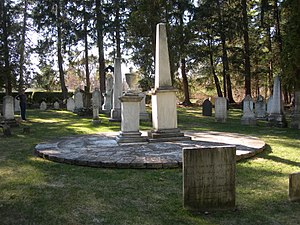 The Sedgwick pie. To truly understand this bunch click on the image to learn just what this is.

This story of New England was first conceived of as a religious tract. As it broke the bounds of that form, it morphed into a novel that relates the tale of Jane Elton, a resident of a western Massachusetts town. I’ve a solid sense of the local geography and if the unnamed burg is not Stockbridge it is one close by.

Jane is that familiar 19th-century literary figure–a child whose world has fallen apart almost completely all at once. Her grossly indebted father dies suddenly and her mother, a marginal if somewhat hysterical figure, soon follows. Orphaned, Jane finds herself the center of a perverse auction. Her father has three sisters. Which of them shall take Jane in? It’s a race to the bottom in excuses and Aunt Wilson wins, er, loses, wrapping her acceptance of her new charge in religious pieties.

Mrs. Wilson is an unpleasant character. Stern and forbidding, she imagines herself a pillar of true faith and member of the elect as understood by fellow Congregationalists. Reform theology can strike those not raised with it as a particularly bleak outlook on humanity’s spiritual condition. In that tradition, since much is unknown, forms and modes of behavior assume great importance.  There’s quoting of Scripture all around. Aunt Daggett even proffers her support of distant missionaries as a reason she cannot assume responsibility for Jane. 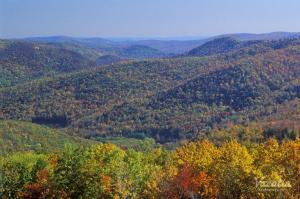 The Berkshires, where this tale is set.

Our orphan joins her aunt’s household and, though she has two girl cousins, Martha and Elvira, close to her in age (they also have a brother), this is not going to be a joyous girls-just-wanna-have-fun slumber party. Jane will work–assuming household duties in compensation for her keep. It’s not quite Brothers Grimm territory, but it shares many details such as remaining home while the cousins attend festivities.

Throughout Jane is a model of what Aunt Em referred to as a “good Christian woman.” She does not lose her temper. She accepts inequity. She sides not with her cousins against their mother. She keeps promises even when they risk immiserating her. She offers the world kindness and is widely recognized as a good, non-judgmental soul.

That last thought is important. Mrs. Wilson is a judgment-leveling machine. Everything she encounters is run through the narrow prism of her worldview. While Jane repeatedly foils her aunt’s attempts to find her wanting, the impulse is always apparent. Mrs. Wilson, disapproving of her late brother,  is certain that Jane will not turn out well even as she refuses to see her daughters’ misbehavior or to acknowledge how much like her brother her son is. 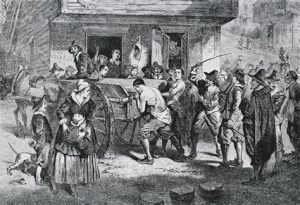 In the early days of Massachusetts, intolerance of Quakers led to driving them out with whips.

Importantly, and highly visibly, Jane rejects her Aunt’s intolerance. Her closest friend outside her aunt’s home is Mary Hull, the former servant of her parents. Mary is a Methodist. Such modern religious tomfoolery is beneath the contempt of the old line Congregationalists. Mary now works for Mr. Lloyd, a Quaker who has settled in town. Upstanding people do not stoop to consort with the likes of such.

Jane does more than stoop. Her assistance is requested by a man who lives outside town. Returning home late, she encounters her cousin, David Wilson, rifling his mother’s pocketbook. He swears her to secrecy. A handkerchief left behind suggests Jane is the criminal when the theft is discovered. Jane, now close to her majority, elects to leave rather than be so slandered. In the haste of her escape, she accepts a marriage proposal from Mr. Erskine, a successful young attorney.

Erskine emerges as more surface than substance. Though Mr. Lloyd, a big fan of Jane;’s tries to intercede and convince Erskine that Jane is so special he should mend his ways, he makes little progress. The problem again is intolerance. If Methodists are bad, Quakers are worse, offering an outlet for wild fights of prejudice and a speech justifying such that could be repurposed, with a few small edits, for almost any bigoted view one cares to hold. 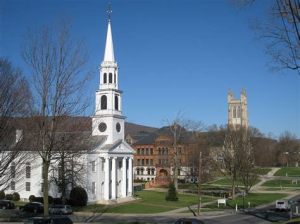 With or without a hyphen, the postcard version of New England is real.

This being a work of instruction every loose end resolves by the finish. Life rarely follows such neat paths and it’s one of the things I struggle with when reading pre-20th-century works. I’m perfectly happy with ambiguity and unsettled endings; it’s the neat packages of earlier times that leave me feeling both dissatisfied and puzzled.

Much as I enjoyed it, starting with the hyphenated treatment of New England in the title, I don’t think this book is necessarily a great work of literature  It’s a different sort of work I found less off-putting than others of the day. It offers a different perspective on religion in America in the midst of the Second Great Awakening and as the foundations of Transcendentalism were being poured. As a bonus, the Penguin edition contains Sedgwick’s historical notes on Shays’ rebellion, an under-reported event in America’s history.

If you’ve any interest in any of those things there’s no better excuse for this being the domestic novel you explore.

One thought on “Just Looking for Another Girl”