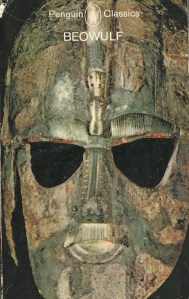 As a good example of a Myers-Briggs NTP, I’m forever conceiving grand projects, the greatest number of which fail to come to fruition.

Close readers will note my attempt to sidestep the responsibilities of agency through use of the passive voice. I suppose that makes me a sometimes scoundrel. This time, though, I’ve actually taken action

The idea for this project took hold with me around 2014, when I read that J.R.R. Tolkien believed his true life’s work would be a proper rendition of Beowulf in modern English verse.  Although he completed his translation in 1926, he was reportedly never satisfied with his efforts and so it was never published during his lifetime.  In the by-then-not-so-new millennium, however, his son, Christopher, had edited his father’s notes and published the book.

Here was something I could sink my teeth into. I had, of course, read Beowulf, or at least a good chunk of it, in high school. This time I could really understand what was going on. For good measure, I could also read Seamus Heaney‘s modern verse translation published in 1999.

The oldest copy of the oldest literary work in English. Kind of a wild idea.

I’d never even consider undertaking such a course with, say, the Iliad. But Beowulf is easy. There’s not that much to it, only 3000 lines or so. In fact, I already owned a prose translation from Penguin which I’d never gotten around to reading. Why not start there?

And so, after a brief interlude, I did just that.

Beowulf, the poem, may be the oldest identified literary work in the English language. There’s some dispute about its dating–was it created in the 6th or 7th century?–and it was composed in Old English, but these are mere details, good fodder for academic careers. Friends of English-language literature can surely embrace the poem as a part of our heritage.

You may ask, “If it’s a poem, why read a prose translation?”  I can’t speak for others, but poetry terrifies me. I miss quite enough in prose when it’s all there on the page. I’m all but certain that verse, with its allusions, allegories and artistry, is designed to trip me up big time.

A more practical explanation also exists. This tale–full of unfamiliar consonant-choked names–can baffle you with keeping the players straight. The book’s appendices contain three family trees and a glossary (that consists mostly of proper names) to help you keep it all straight. As I kept flipping to the back of the book I wondered if García Márquez arrived at the literary necessity of such a device independently.

Sutton Hoo, an Anglo Saxon burial site and a landscape that strikes me as consistent with our tale.

So, on to our tale. The first entry in the English literary canon is, in fact, a story of Scandanavia.  The Danes are betrodden. Our hero is a Geat. As far as I can tell, nobody likes or trusts the Swedes.

This is a good place to introduce an idea I’ve borrowed and clubbed into an unrecognizable form. From the anthropologists, I learned about sociocultural evolution, or how human societies change over time. Yet my own experience suggested some cultural artifacts and elements were difficult to move past. After seeing one too many organizations replace the majority of staff with no noticeable changes in organizational behavior I went all Hegelian and decided cultural persistence mattered at least as much as, if not more than, evolution.

As Exhibit A supporting such a notion,  I offer you the bounties of English-language literature and popular culture that draw on the foundations established in Beowulf. Middle-earth, Westeros, even Panem resemble the early-Medieval world of Beowulf. Trips across storm-tossed seas and fetishization of handworked armor are par for the course. The color palette runs to earth tones and shades of grey, as though soap were the most exotic idea ever. Chances are, If it appears in a Marvel-branded product,  it probably originated here.

I’ve as yet read nothing that suggests why Scandanavia should be the setting of the first English epic. Perhaps the people of the continent were alluringly mysterious. Perhaps the intercourse between the Anglo-Saxons, Danes, Swedes and Geats was great. Perhaps a scary story requires enough distance to whet the reader’s interest while not instilling too much fear.

Beowulf, you see, is literally a monstrous tale. One that establishes another trope: you can’t have too much of a good thing. Why have one monster when three will do?

At the outset Hrothgar, king of the Danes has built a great hall, Heorot, to celebrate the good fortune of his lords and armies. The nightly merriment does not sit well with an area resident, Grendel. Here we encounter an archetype. Grendel dwells in the swamp and possesses super-human size and strength. Vaguely reptilian, this scaly, befanged beclawed beast walks on two feet, renders destruction in his wake and enjoys his meat bloody and fresh. 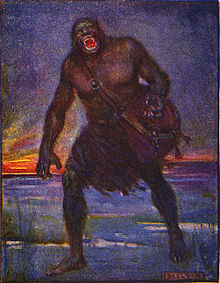 So horrific are Grendel’s attacks that word quickly spreads, even finding its way across the sea to the land of the Geats. Beowulf, distantly related to Hrothgar in the ways of royalty, leads an expedition to Denmark to confront and conquer the beast.

Almost immediately our hero and villain clash in hand-to-claw battle. Beowulf is no slouch in the strength department and the battle does not go well for Grendel, who loses an arm. While the Geats and Danes celebrate, Grendel slinks off to the swamp to breathe his last. But he doesn’t expire before his mother encounters her war-torn pup.

Enter another trope: the avenging mother who is, no surprise, even worse than the son. She attacks. All are stunned. Beowulf promises to finish the job he has come to do. And so ensues a battle deep in the swamp’s waters that’s equal parts Aquaman and Gillyweed. This time a special weapon, and the good fortune to strike exactly the right spot on the beast, ensure Beowulf’s victory. Nothing familiar there at all, right?

Beowulf is hailed and returns home to eventually become King of the Geats. This ascension is explained, but you need to be a fan of monarchial intrigues to follow it.  Beowulf rules fifty years before his final adventure. 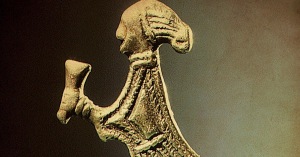 A Medieval mother, decidedly not Grendel’s, that illustrated a fascinating review. Cilck the photo to check it out.

That encounter, too, involves a beast, alternatively referred to as a dragon and the Worm, who breathes fire and guards a great treasure. Beowulf’s last challenge is to free the treasure from its horrific guardian.

The tale is an epic so I bet you can imagine all that happens as it wraps up. The contours are so familiar that the story practically writes itself for the modern reader.

Which is actually kind of remarkable for a poem written in the 7th century.