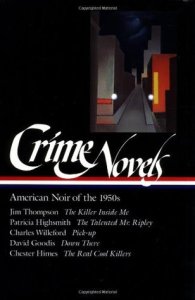 Sometimes the work of the editorial hand is more apparent than others.

It’s taken me a while, okay, decades, to understand this. At first, I thought an editor’s job was to fix mistakes. Then I thought it was to just acquire writers. It’s only in recent years, driven mainly by my lazy-man’s habit of reading anthologies, that I’ve divined the work that lies not just in selection and correction, but in shaping, especially as that applies to a collection.

This collection has been a doozy.

As I worked my way through the five novels collected here by Robert Polito, two things struck. me. One, as I’ve previously noted, was the distinctly different tone of these books, all published after World War II, compared with the noir novels of the 1930s I’d written about earlier. You can file them under the same heading, but in doing so you elide great differences.

Himes caught my attention right away. The scene is Harlem, sometime in the 1950s, the place is the Dew Drop Inn, a bar on Lenox Avenue. Big Joe Turner is belting one out on the jukebox, ladies are dancing, the serious drinkers are drinking. There are at least two white men in the establishment. One is the manager, although he lets the bartender, Big Smiley, handle the patrons. 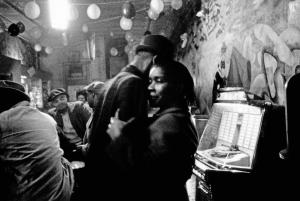 Uptown nightlife back in the day.

The other Caucasian is a patron, a man we later come to know by his last name,  Galen. He’s a familiar type, an adventurer from downtown who’s probably seeking something.  A large man, in some ways he’s larger than life and certainly has not gone unnoticed by the other patrons of the bar who are mostly African-American.

I feel compelled to note here that this novel is a product of the 1950s. The current fashions in language have not been accommodated by the editor. So, a seeming majority of characters, when described, are called Negro or Colored or Black. Conversely, the repeated appearance of “mother raper” strikes me as an authentic editorial intervention of the period.

Suddenly, a drunk holding a knife accosts Galen. The drunk spews vague, barely coherent accusations and threatens the patron. Even in Harlem, there are rules. Trouble with a white man can mean bigger trouble, business- and life-threatening trouble.

Big Smiley moves to shut the altercation down. When the situation escalates, Smiley does what any normal bartender with bouncer responsibilities does. He reaches under the bar, pulls out an ax and chops off the arm of the drunk.

A melee ensues. Galen is caught in the midst of it and flees the scene, bolting down the middle of Lenox Avenue as though he’s going for a run in the Park. Except that he has pursuers, a group that grows as the original vigilantes from the bar add all sorts of local folks to their posse. The pursuit doesn’t last long. A shot rings out, the big man falls, and the cops are on the way.

At which point a pair of the greatest cop characters I have ever encountered enter. Grave Digger Jones and Coffin Ed Johnson are long-time partners, plainclothesmen, if not detectives, assigned to help keep the peace in Harlem. Both men could live in the neighborhood, although Coffin Ed lives in the,  by comparison, almost suburban precincts of Jamaica, out in Queens.

Digger and Coffin Ed quickly corral a suspect, even as a larger force is carrering towards the intersection of West 127th Street and Lenox Avenue. They have their man in cuffs when members of a local youth gang confront them. The gang is a motley crew of  teen-aged-would-be tough-guys who call themselves the Real Cool Moslems 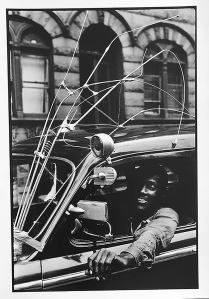 If I didn’t know better, I’d say Leonard Freed managed to catch a shot of one of our heroes.

Things quickly turn south. At this point the cops are outnumbered. When one of the gang members douses Coffin Ed with a vial of perfume–this being their signature, a sort of mid-century urban coup counting–the cop, whose face bears the evidence of a previous incident when acid was thrown on him–shoots blindly, killing one of them.

The Moslems, led by their nominal head, who goes by the moniker Sheik (other gang members have equally inspired names: Inky, Bones, Choo-Choo), flee. For good measure, they take the cops’ prisoner with them.

I’m not going to say much more about the plot because it’s both intricate and believable. That’s not always the case in these sorts of books.

It’s tempting to say the tale feels a little claustrophobic. Most of the action takes place within two blocks of the opening location except for one excursion Digger makes to 145th Street. He calls the area Washington Heights but I’m reasonably sure that even back then it was known as Hamilton Heights. Aside from that, it’s all central Harlem and mostly one building, heck, mostly one bedroom.

Grave Digger Jones has to be one of the greatest characters I’ve ever encountered in crime fiction. Here’s how he’s described in action:

“[The Chief] was interrupted by the flat whacking sound of metal striking against a human skull.

No one had seen Grave Digger move. …

Grave Digger had his nickel plated thirty eight gripped by the long barrel, making a club out of the butt.The muscles were corded in his rage swollen neck like rigging ropes and his face was distorted like a maniac’s. An effluvium of violence came out of him, the sudden smell of death.”
(p, 849)

Can crime fiction be literature? Can violence be art? I know there are souls who genuinely believe that the answer to both those questions should be a resounding “No!”

I imagine the RCM’s building might look a lot like this one a few blocks furter uptown.

I’m not so sure they’re right. Read that above block of text  agin. That final paragraph is as masterful a bit of writing as you’ll ever read. Like Digger, it explodes, then subsides.

I’m not going to feel badly about my dalliance wi h these sorts of tales. They entertain me in a way comedies of manners never will.

And sometimes, they’re transcend entertainment and even achieve artistry.