A genuine 80s houserockin’ party was thrown in Newark last night and the guests of honor did all the work.

Appearing at the outset of the TD Bank James Moody Jazz Festival, Mavis Staples and Buddy Guy sang and played gospel and the blues, demonstrating the power this music still holds. Remarkably, both headliners (Mavis opened the show, but that’s a technicality–these two are co-equals) are now in their 80s. If you want to make a END_OF_DOCUMENT_TOKEN_TO_BE_REPLACED

There’s an 8-piece band in there, I promise you.

Bear with me a moment.

In September, 1980, I found myself sitting in line at an ungodly hour at UMass, waiting to buy tickets to see the Grateful Dead at Radio City. The chatter among the other line-sitters was of past shows. 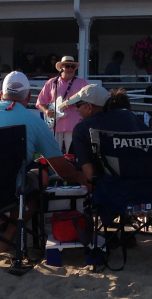 Every so often I’m able to deliver on what might otherwise be just a well-intentioned promise.

A short time ago, in the J. Geils post, I mentioned a band and guitar player I’ve been listening to since 1979. That’s when the  self-titled Roomful of Blues album appeared, seeming to land END_OF_DOCUMENT_TOKEN_TO_BE_REPLACED

By OpalDivine [CC0], from Wikimedia Commons

There are storied clubs all over these United States but fewer than there used to be. So when there’s a chance to see an act I like playing in one, going is a no-brainer. Which is how I came to be standing in Austin‘s fabled Continental Club taking in a show by Rosie Flores and her END_OF_DOCUMENT_TOKEN_TO_BE_REPLACED

At what point does one drift into helpless, even embarrassing fits of nostalgia? That thought was on my mind even before it became the subject of discussion on the ride home after last night’s Gang of Four show at Irving Plaza.

A related question: when is a band no longer a band? That second question may be more important than the first. A few months back I END_OF_DOCUMENT_TOKEN_TO_BE_REPLACED 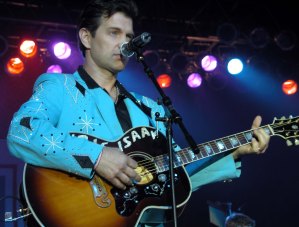 It has to be the band uniforms.

That was, for a moment last evening, my reasoning for what is my fairly incongruous love of Chris Isaak and Silvertone. While my tastes are all over the map, Mr. I is more mainstream than a lot of  other folks I love. So I have some figuring out to do.

Uniforms are as plausible an explanation as any. In my youth, all the Motown END_OF_DOCUMENT_TOKEN_TO_BE_REPLACED

The Modfather took the stage clad in a double vent, charcoal grey suit, white shirt and royal blue cravat tied in a 1970s-Roger-Moore-as James-Bond oversized knot.  If it weren’t for the Telecaster and the Rod Stewart hair (well, if Rod Stewart’s hair was completely gray) one might mistake him for a banker rather than a rock star. Paul Weller, ever the fashion plate, may be the only rocker committed to the sartorial as well as the musical.

Last week Weller played 2 nights in  New York on one of his sporadic visits to North America. Tour really isn’t the right word since he tends to appear in a handful of cities and quickly decamp for Albion. For many years my Spring peregrinations have kept me and Weller apart but this year the scheduling Gods allowed me to catch up with my Modish near-contemporary.

Was it worth the wait? The answer is a qualified yes. But those qualifications are key. Weller is supporting a new album, Sonic Kicks, and the long set (30 plus songs and 2 plus hours–you certainly got your money’s worth) is divided in to three parts. The first showcases songs from the new album including the single, “Klang Klang.” I have this sneaking suspicion that Weller grew up listening to more than rock n roll based mostly on these lyrical games he plays. Almost twenty years ago, on 1993’s Wild Wood, he referenced Cole Porter with “the lonely traffic’s boom.” This time it’s Hugh Martin and Ralph Blane’s Academy Award-nominated  “The Trolley Song.”

To be fair–and I don’t think this is just a familiarity issue–the new songs were the weaker part of the show. Weller is famously proud END_OF_DOCUMENT_TOKEN_TO_BE_REPLACED

The pretext on which I dragged three colleagues to McGonigel’s Mucky Duck in Houston last Saturday night was pretty simple–we can’t miss the chance to see one of America’s musical wildmen. The particular wildman is, of course, Junior Brown, king of the git-steel.

“I do believe this club is The Ritz,” said Jon King after Gang of Four finished their opening number, You’ll Never Pay for the Farm, (the new album is Content and available now) at Webster Hall last night. King was right–the band had played END_OF_DOCUMENT_TOKEN_TO_BE_REPLACED