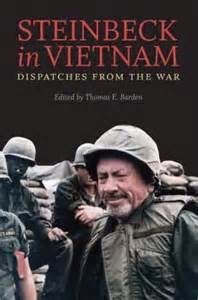 My dad worked on the NYC subway system and, growing up, the family dog was a poodle.

That’s a non sequitur only a 6-year old could love but it lies at the heart of my seemingly life-long fascination with John Steinbeck. When I was young my dad’s job was road car inspector. He was, essentially, one of  the system’s Triple A guys–the ones who hopped the next train out and walked down the tracks to get stalled trains moving again.

Whatever he found on the tracks that tickled his fancy he kept; evidently lost and found was only for items dropped in the cars and on the platforms. All sorts of odd flotsam found its way to our basement including any book that caught the eye of my non-reading male parent. And so I encountered Charley.

Travels with Charley: In Search of America  was one of the last book’s Steinbeck lived to see published and the paperback edition had a painting of the author and his pooch, a standard poodle named Charley, on the cover. I had to age into reading the book but once I had enough comprehension to understand the sell copy on the cover I was hooked. Steinbeck, like me, was from Long Island! And he had a poodle! Who knew you could have it all?

And so my love of Steinbeck is rooted in a mistake: the Faulkner of  California, to me, has always been a Long Islander.

Someday I may get around to revisiting those California tales. This volume, though, doubles down on the Long Island angle. Here’s the back story: Firmly ensconced in Sag Harbor, and after 1962 a Nobel laureate, Steinbeck became acquainted with Long Island’s better classes. Among them were the Guggenheims, the family that gave their name to the museum you may have heard of. 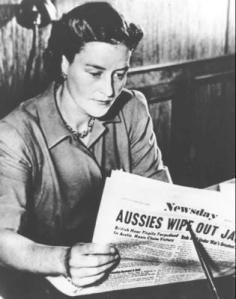 Among the latter-day amusements of the Guggenheims was Newsday, the Long Island newspaper of record and a pet project of Alicia Patterson. Alicia, herself newspaper royalty (her father, Joseph Medill Patterson was the founder of  the New York Daily News and the Medill family’s newspaper fortunes helped fund Northwestern University’s J school), was married to Harry Guggenheim and served as publisher from its founding just after World War II until the mid-60s.

Alicia died in 1963 and in 1965 another Steinbeck friend–Lyndon Baines Johnson (their wives shared a UT Austin connection)–started angling to get the author to Vietnam. There’s nothing like a Nobel prize to put a shine on a questionable endeavor. Somewhere along the way that idea was transformed when  Harry Guggenheim proposed Steinbeck go to Vietnam and the surrounding nations as a war correspondent and report back on what was really happening.

This was about the time things started really ramping up in Vietnam and the dissenting voices were getting louder, too. Guggenheim was a supporter of the war. Unexpectedly, Steinbeck was, too. At least at that point. So off to Southeast Asia journeyed the Steinbecks. (Elaine traveled with him although she is a minor presence in the book.) 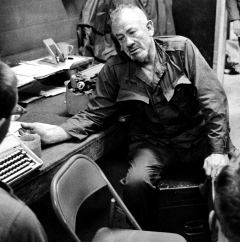 Steinbeck at An Khe
December 1966

At some point Steinbeck wrote a travelogue of a European journey for the paper, structuring those columns as letters to his friend Alicia. As with that previous effort Steinbeck submitted these columns as letters addressed to his now deceased friend. The paper ran the majority of the pieces Steinbeck submitted and, overall, their editorial hand seems light. It’s worth noting that this volume represents the first time all of these pieces–the submitted but unpublished as well as the ones that ran– have been collected and run together. Previously, a few appeared in anthologies.

So what will the Steinbeck lover or merely curious reader find in these 60 or so columns? Perhaps the most startling thing is the bellicosity. If you’ve read anything at all (or too much, as I have) about the Vietnam War you associate certain tones and stances with certain viewpoints. The poles are generally the Johnson Administration‘s aggressive position and the Peace Movement’s shut-it-down stance. Mainstream media seemed to alight in the middle until the facts made the government position untenable.

At least at the outset, Steinbeck is firmly in the government camp. It was a little shocking to read how every day, US forces (inevitably, ‘we’ or ‘our boys’) were interdicting matériel and punishing the Viet Cong in a manner that made winning inevitable. Eventually, though, after he’s left the country and had time to dwell, the pointlessness seems to start getting to him. The gung-ho seems replaced by ‘to what end?’ 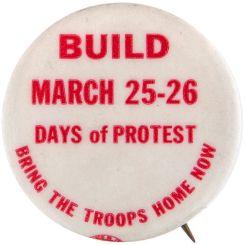 An Artifact from back in the day. The Administration had the media, the opposition, badges.

I wondered at the apparent absence of handlers. I’m not naive enough to think the President of the United States let a Nobel prize-winning writer loose in a war zone unattended. But, it’s Steinbeck. So the focus is on the little guy. There are plenty of grunts and junior officers but not a lot of generals. When officialdom appears it doesn’t often appear in the most flattering light.

Most important, there’s some great writing. There’s a whole column dedicated to  the recounting of an enlisted man’s philosophical take on the war that stands up to anything else in the Steinbeck oeuvre. He meets with students at Huế and comes away somewhere between irked and disappointed, although in the telling you see a cultural phenomenon with regards to roles reported elsewhere by Frances FitzGerald. He provides a glimpse of troop humour, a glossary of Vietnamese terms and even some advice for turning Saigon’s Dickens-like street urchins into a spy force.

Or how about this bit of literary firepower, expended on a column that extolled the technology of air-war at night:

“Then the order came and a flare was thrown out and another and another. They whirled down and the brilliant lights came on. We upsided and looked down on the ghost-lighted earth. Far below us almost skimming the earth I could see the shape of the tiny skimming FAC plane inspecting the target and reporting to our pilot. We dropped three more flares, whirled and dropped three more.” (p. 102)

Not the typical fare for a daily newspaper and certainty not what you’d expect to see expended on what is, really, an almost awestruck recounting of the work of a killing machine. 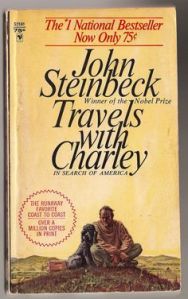 The book that started it all for me when it comes to Steinbeck.
Note the bargain price.

My original love of Steinbeck, in part,  stemmed from his obvious love of the common man and woman so the out-and-out war support was a bit shocking. But I’m not sure he was ever completely sold. Early on he says “To me, all wars are bad. There are no good wars…” (p. 54)  and by the last column he’s wrapping up with “What I have been celebrating is not war but brave men.” (p. 154) One of Steinbeck’s sons was in country at the time and maybe the enormity of seeing his own family in harm’s way struck home.

These columns were the last work Steinbeck lived to see published. Professor Braden, in an elegant introduction and afterword that adds just the right amount of context without overwhelming the primary work, has done a great service in collecting them and rationalizing the archived versions.

In the afterword Barden notes his own experience in Vietnam, a few years after Steinbeck was there,  and what he was told by his CO on his first day. There’s no better way to end than with that  advice which he says Steinbeck learned the hard way:

“We’re the redcoats in this one lieutenant. Don’t be John Wayne. Take care of your men and get everybody home. We won’t be here much longer.”