This week I’m revisiting a modern classic. You didn’t think I’d lived this long without reading Roth, did you?

Roth is Philip Roth, the one-time enfant terrible of American letters, a man who long ago crossed the great divide into the land of literary writers. This volume, originally published in 1959, contains the title novella and five short stories. It is Roth’s first work published between hard covers.

The more I do it the more I learn the value of rereading. I tore through this book in my twenties and for everything that stuck, I now realize, more was left behind. One thing that’s instantly apparent to me is Roth’s language itself. I don’t mean the liberal use of Yiddish or the dialog, straight out of radio’s The Goldbergs, with its teasing comeuppance and guilt-inducing questions.

While those helped put Roth on the map what caught my attention this time was a familiar tone. It’s the sound of postwar-/pre-1960s-turmoil America. In fact, it reminded me, in it’s almost everyday matter-of-factness, of Salinger.

Tone is not the only thing these two masters have in common. Each is deeply motivated by the psychology of human relations and it was only in this reading of Roth that I understood that about Salinger.

What did it was the appliances.

When I first read this I was still too young and close to my red diaper baby education to recognize the complicated contours of human life.  At the time, I took the Patimkin’s kitchen-full of gleaming small electrics to be critical of consumer culture.

And I think it is, in a way, along with the modernities of Woodenton life described in “Eli, The Fanatic.” the final story in the collection. In each case I think the blender and foot-sizing x-ray machines  and the rest represent the allures–and maybe perils– of the broader culture.

In at least one of these stories our hero literally hits his mark.

This is where Roth’s Jewish upbringing–never far away–really underpins his writing. I once heard Chaim Potok lecture and he spoke of the central role cultural tension played in his work. That same tension–the uncomfortable  place between what you know, and are, and what you think you want or ought to be–lies at the heart of Roth’s work.

So what of these tales populated with machers and mensches, nebbishes and shmoes, crazy tantas and prospective shviggers? (Click here for a reliable translation of these Yiddish words , and quite a few others.) Well,  if you’re gonna do tension it’s probably best to deliver it wrapped in humour.

Thankfully Roth has both a sense of humour and the ability to be funny in print. Here you get the range from bemusement to belly laugh. So there’s Aunt Gladys, the walking talking superego of Neil Klugman, the focus of the title novella. And there’s Ozzie Freedman, the eleven-year old hero ultimately responsible for “The Conversion of the Jews” in the story of the same name.

The Newark Public Library
Where Neil Klugman works and waits.

Almost all the tales contain some humour. I think it’s that acceptance of humour living side by side with anger, tears and pain that’s the single greatest contribution of American Jewish writers to the broader culture.

The title novella focuses on Neil Klugman’s summer romance with Brenda Patimkin. The Patimkin’s have achieved the American dream, World War II having been very good to the family’s plumbing fixtures business. They live in Short Hills now, having left Newark and its ethnic neighborhoods behind. That’s where Neil still lives, with his Aunt and Uncle, and works, in the Newark Public Library.

It occurs to me that as in Borges the library is significant. Neil’s been out of college for two years; Brenda is still pursuing her degree at Radcliffe. But he’s marking time in that tomb of knowledge where the road ahead includes a desk and section of one’s own. His minor act of rebellion, centered as it is on a book of Gauguin paintings, is telling. Neil needs to escape.

You can’t fault someone for trying to avoid the misery if basic training, can you?

But where to? Brenda’s embrace? Sure, but, ultimately, that comes at a price. You can put off serious commitment for a summer but not for forever. And so things work out, but in an extremely modern way.

The broader culture is never far away. In “Defender of the. Faith,” a story set in an Army camp in Missouri during the waning days of World War II, Sergeant Nathan Marx wrestles with his conscience. He’s torn between his sense of duty to an institution in which he’s proven himself in combat, like any other soldier,  and to his religious upbringing. A green recruit, Sheldon Grossbart, looking to gain an advantage through a coreligionist, pushes Marx until he’s pushed too far.

The one tale not like the others is “You Can’t Tell a Man by the Song he Sings.” Set in high school, it involves an awakening, of sorts, for its principal who spends a year in the thrall of not one but two juvenile delinquents. Perhaps I just can’t find humour in high school hi-jinks.

SHort Hills, NJ, the town where the Patimkins live. It could as easily be Eli Peck’s Woodenton, NY.

For me, the final two stories were masterpieces. In “Epstein” we see a man, approaching sixty, avail himself of one last fling. His wife figures it out, all hell breaks out and an entire family crowds into the bedroom of two, naked middle-aged Jews.

I’d have had a heart attack from laughing if Epstein hadn’t beaten me to it. But what really stunned me was how accurately a man in his twenties wrote about the mind of a man in his fifties.

And then there’s Eli Peck, star of “Eli, the Fanatic.” Eli is an attorney, a man making his mark on the world. Child due any day, partner in his firm, firmly ensconced member of an integrated suburban community. Well, integrated in the sense that Jews and Gentiles both live there. Eli is a bit high strung, has had a couple of nervous breakdowns and is so able to see both sides that he often finds himself rooting for
his opponents.

He’s been hired by a group of his neighbors to solve a problem. A  yeshiva has opened in an old-mansion on the edge of town. Populated with war refugees, primarily children, it’s a  boarding school where no such school belongs, at least according to the zoning laws. 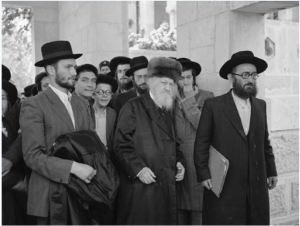 The rebbe arrives.
This is the look that drove Eli Peck’s modern Jewish neighbors almost berserk.

Eli’s job is to persuade them to leave or litigate the same result. After all, this is  “a modern town,” to quote Ted Heller, one of the neighbors, the sort of place where Jews and Gentiles have only been able to live together since the war. Plus, these new people, they’re, well, pick your word: fanatics? medieval? superstitious?

Predictably, Eli finds his opponent persuasive and seeks a middle way out. He donates two of his suits so the young man who runs errands for the school can appear in town without causing a stir.

The offending displaced suit and hat are returned to Eli. He dons the suit that so offends his neighbors and walks slowly through town, ending up at the hospital to see his newborn.

The results are less important than the lingering picture of a lost soul, almost literally uncomfortable in his own skin, caught between two rights. Stunning.