Math can be maddening.

That’s one lesson you might draw from this biography of noted mathematician John Forbes Nash, Jr. It might even seem of a piece, if you’ve read the biographies of any other major math figure, for instance, Georg Cantor, who has quite a story of his own.

I wonder, though, how many people really read such books–everyone who saw me reading it told me they’d seen the movie; no one said they’d read the book. Imagine the writer who decides there’s a public interested enough to invest the time in reading about stuff few of us can comprehend.

Better yet, imagine the editor who agrees. I’m not saying such an audience doesn’t exist, I’m saying if you were sizing it for commercial purposes you might think twice. Even I don’t qualify. I’m not really a ‘biography reader,’ though I take the plunge when the subject is related to my broader interests. 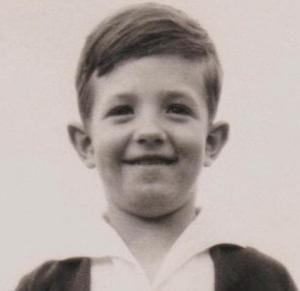 Here, for me, the interest was the math. Game theory, the area Nash is most commonly associated with, is widely applied in business and social science, and I’ve written before about the pioneering work of von Neumann and Morgenstern.

That book is a far cry from this one. Shorter and more nakedly didactic, McDonald was introducing higher math to an audience more typically oriented toward accounting. I’d hoped Nasar would provide me with a complementary understanding of Nash’s contribution, which addressed non-cooperative, non-zero-sum games.

If those last six words set your temples throbbing, this might not be the book for you; if your pulse quickened, it might not be either. Well-crafted and eminently readable, the attraction when this book was published in 1998 wasn’t just the recent (1994) awarding of a Nobel to Nash, it was his personal story which emerged in fits and starts at the time.

Young scholar. Nash at his Ph.D. graduation from Princeton.

Nash, you see, did his most notable work before he turned thirty.  Around that time, he succumbed to paranoid schizophrenia. For the next three decades or so he wandered around the edges of academia, was checked in and out of institutions and underwent talk therapy, insulin shock therapy, psychotropic drug therapy and periods of severe disengagement with the world around him. If his wife, Alicia, hadn’t always been there, even after their divorce, he may have just slipped away forever.

There’s almost no better illustration of a truth I always aver: reality–personal and social–is a very fragile construct.

There’s a part of me that wonders if the destruction of that reality isn’t part of the attraction of the story. It’s not hard to believe that there are many people who succumb to mental illness at some point in their lives. It’s not hard to believe that there are people who made personal choices which, while entirely conventional, were at odds with who they really were. It’s not even hard–and arguably more interesting, not to say uplifting– to think about people recovering from diseases often considered to be debilitating.

Any of those might provide the meat for a novel. The Nash story resonates as biography not because of his turmoil, but because of his genius and the woman who recognized and helped save it. 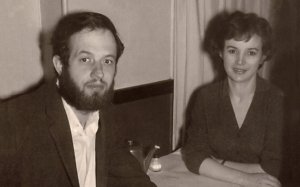 Nash, after his illness struck, and the woman who stood by his side for six decades, in Paris.

History abounds with tales of genius. It’s impossible, for me if not for most of us, to imagine getting up in the morning and writing a Shakespearean play or sonnet, a Bach fugue or apprehending the theory of relativity. It’s humbling to remember such human beings existed and did such things. Yet humans (at least this one) also seem to have a levelling instinct. Maybe it helps us close the distance to find fault with geniuses.

Consider John Nash in this light. An unusually intelligent, bookish boy from a country town, he was fortunate to be born to educated parents (an engineer and teacher) already firmly established in the middle class. Though there are intimations of mathematical brilliance, no one really cottons to it, and there are enough youthful hijinks to paint him as a more or less ordinary boy.

Then he goes to college and quickly ditches the study of engineering for the study of math. It’s wartime, he excels, and by his early twenties is pursuing his doctorate and engaging in peer-like dialog with living legends such as von Neumann and Einstein. He extends game theory which helps make it, in later years, a practical tool while doing much more important pure math work with embedded manifolds and partial differential equations. He’s good, he knows it and he pisses off more than a few people.

All before he hits thirty and then it all comes crashing down. 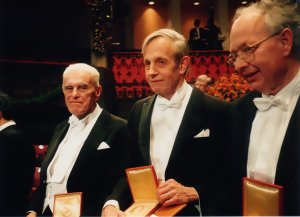 There is, of course, the schizophrenia. We all know that the origins and triggers of that disease remain mysterious. Was it the stress of trying to achieve professional security? Was it latent/denied homosexuality? Was it the fatherhood of two boys by two women?

We’ll never know, we never do. With geniuses of yore, we fill in the gaps. You can’t exactly interview Mozart‘s contemporaries but you can, if you’re Peter Shaffer, create a believable simulacrum of a genius in Freudian torment, manipulated to self-destruction by a lesser rival. It doesn’t illuminate the genius, it can’t even begin to explain the lasting appeal of simple beauty loosed on the world (I’m thinking here of Eine kleine Nachtmusik), but it brings everyone down to size.

As the story of a life, Nash’s has all the elements: genius, torment, recovery, redemption and an angel. Like any biography, despite the myriad interviews with so many of the critical players who were still at work 20 years ago, the massive amounts of speculation stand out: the author’s as well as the interviewees. It’s the defining feature of the genre. We want to understand the genius or celebrity as a person, but it’s always just an educated guess by someone who got as close as you can to another human being.

Mathematician.
Nash at the blackboard.

The fact is we’ll never really know most of what happened because we’re not Nash. It’s easy to say “He believes, rightly or wrongly, that he willed his own recovery.”  (p. 353) Yet within the previous twenty pages, we learned he spent countless hours in the religion section of the Princeton library. Could he have learned how to tame his monkey mind and live with it? We’re not told, we don’t know if he was asked. Only Nash knows if sutras soothe.

I came to this book on a search and came up short. A biography that explains difficult math is possible. David Foster Wallace wrote a beautiful book (according to Jonathan Franzen he called it a “booklet”) about Cantor and the development of the mathematics of infinity–a task that drove the German mathematician into the asylum more than once.

But, he was a genius.