The Trouble with Testosterone
And Other Essays on the Biology of the Human Predicament
Robert M. Sapolsky 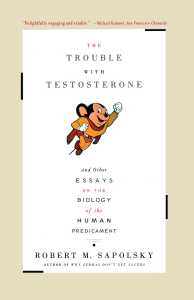 Last I looked,  Mighty Mouse had little to do with science.

Yet an editor agreed to use his image on a book cover–and a science, no, not just a science, a biology book cover at that–for a reason. And it wasn’t just to crack me up.

(It probably was intended to draw my attention to the book on the shelf. Alas for the bean-counters and the crowd charged with making a profit, the shelf I found it on was in the remainders section.)

That cover illustration, though, is probably the only thing questionable about this volume of essays by a leading biologist. If only it it were that simple. Robert M. Sapolsky has had more labels hung on him than a marked down dress at Bloomingdales. 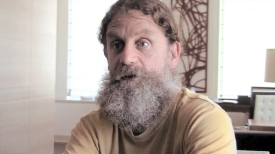 My favorite, which makes me fret about the influence of German  in science and the academy,  may be neuroendocrinologist . That, however, may just represent the sesquipedalian tendencies of the over-educated.

For a moment consider the plight of the scientist. He or she has really cool things to tell us about. Sometimes they profoundly impact what and how we think about things. Other times they’re just kind of neat to know. Many times they are difficult to explain. And if you have an ability to overcome all that in plain English, you’re up against a standard set by Stephen Jay Gould. It’s potentially terrifying.

That doesn’t stop folks from trying. And it doesn’t mean that the failures aren’t apparent. It’s a tough gig so when you encounter someone like Sapolsky it’s almost a relief. 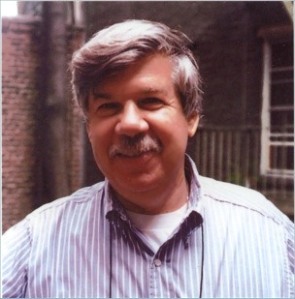 The 18 essays contained in this volume deal with a surprisingly wide range of topics.  We look at schizophrenia and other mental disorders. We explore voyeurism in humans and baboons. He lends his voice to the chorus promoting the important work done by Daniel Kahleman & Amos Tversky on decision-making. (Anyone involved in persuading people to make a choice ought to be aware of the work done by those last two, by the way.)

And he talks a lot about stress and the impact of Western lifestyles on our internal systems. Stress is bad. Artificially- or naturally-sweetened stress is worse.

One of the unusual features of this book is that each essay is introduced with a work of art. Only one of them actually plays a role in the essay that follows and, except for Goya‘s The Third of May, 1808,  most are by more contemporary artists. I thought it was neat to add a visual element–and a non-technical visual element at that–to the mix. I may be stretching, but based on the good-humour evidenced in the writing I bet  the inclusion of the art was Sapolsky’s idea. Probably Mighty Mouse, too. 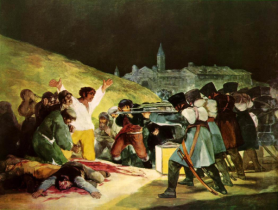 One other feature of the text bears noting. I’m unusual in that footnotes beguile me rather than scare me off. That’s usually where the meat or the problems are found. But they are a net negative for almost everyone else. Sapolsky has addressed this issue by referencing works in his main text as needed and adding a ‘Further Reading’ section to each essay. It typically contains the work he’s cited and some other things to read as well. Also atypically, it’s as likely to reference more accessible as well as academic work.

The title essay is a perfect example of why the whole book is worth reading. The subject is whether aggression is the end-result of testosterone production and here our author/hero gets to strut his neuro- and endocronological-stuff. It’s a tour de force. Not only is the question answered in the negative, along the way you get a lesson in the difference between effects and causes, a hint of some advanced maths and an honest, funny look at a very real phenomena–physics envy.

This last is important because it is not just confined to the natural sciences. The b-schools and social science departments are filled with wonky types intent on reducing human behavior to the types of equations that describe quantum interactions. Good luck with that. 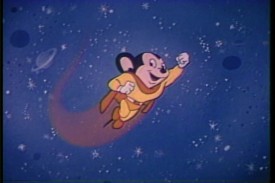 There is a personal essay about the death of his father that I could relate to so soon after the death of my own. And then there’s the final, big piece that brings us back to the schizoid personalities we started with. In 45 pages Sapolsky delivers the brief for science and secularity.

I’m always a bit saddened when someone feels the need to ‘take on’ belief.  For me, if you decide you don’t or can’t believe that’s fine. I’m more perplexed as to why so often there’s a missionary need that accompanies that decision. Loz em gaien as my Yiddish-speaking friends say.

I’m not being mean. A lot of work went into those 45 pages and I feared the worst when the text read “…I will borrow a trick used by many cultural anthropologists…”(p. 263) I’m always prickly when my sandbox is entered and if you’re going to dabble, please don’t denigrate a tool by calling it a trick. Otherwise one shouldn’t be surprised when ‘thought experiments’ are derided.

And what he does with that trick is make a muddle of things. Starting with Hindu practice he cycles through Orthodox Judaism, Islam, Roman Catholicism and even Protestantism  to make clear that religious practice exhibits strong parallels with obsessive compulsive behavior.

I wasn’t put off by what Sapolsky wrote. Nor was I convinced. He could have dug a bit deeper and tried to establish a different way of understanding some of what he’s describing (for example, the work discussed here).  Like many another he gives short shrift to the things in which he doesn’t believe.

And that’s okay because on the science, he’s more than convincing.

2 thoughts on “Sugar and Stress”