What happens when the character you originally liked wears out his welcome?

That question has been on my mind lately as I’ve found myself struggling with, of all things, crime fiction. And while I’m not sure if I’m hitting the same wall with every writer who’s giving me trouble, I am sure that the question applies to Marion ‘Doc’ Ford, the primary character of Randy Wayne White‘s set-in-Sanibel mystery series.

I’ve written before about the challenges series present for writers and editors. It hadn’t occurred to me that the reader might approach a breaking point, too. After all, isn’t the whole point of a series to keep you coming back for more?

I have grown bored with characters, or who they’ve become, on some long-running TV shows. I’ve just never hit that point with a written series before. Or if I did I didn’t notice. There are more than a few I’ve stopped right in the middle of,  though, so maybe that’s the reason why.

The famous Sanibel stoop, demonstrated by a shell collector. A lot more shelling than spying happens on the island.

Which brings me back to Doc Ford. As a kid I had a vivid imagination and fantasized about possible careers the same way Diane Chambers acquired college majors. One of those was marine biologist so a hero who is a veteran of black ops but known to most by his day job as the proprietor of Sanibel Marine Supply, where he collects and sells marine life and continues to conduct his own research, was naturally appealing.  After all, I imagined being a spy, too.

I was surprised, at the outset, to find the book’s opening chapters set in Manhattan.  A little bit further in, the action moved 130 miles or so east and once again I found myself on home turf.

Anyone who has ever considered writing fiction has been told to write what you know. As instructions go it’s not exactly mandatory but it’s followed often enough to function almost as a rule–one aided by the prime example Mark Twain offers. Much of the  delight I take in Nelson DeMille‘s books (see here and here) is rooted in his choice of geographic locations.

The Maidstone Club in East Hampton, NY. Doc Ford visits a private home that closely resembles this pile, right down to its age.

Yet if you think about it, the whole notion makes no sense. I’m reasonably sure that William Shakespeare had no first-hand knowledge of Greek life in the age of Pericles and yet he crafted Timon of Athens. Nor, more recently, did Robert Graves bring his personal Roman experience to bear in I, Claudius. So maybe such knowledge can be helpful without being, strictly speaking, necessary.

Then, of course, there are the times when it makes all the difference in the world.

So we find Doc Ford and his sidekick, Tomlinson, kicking around the East End of Long Island in January.  It turns out that Sighurdr grew up out there, specifically in Sag Harbor. He’s as sketchy and conflicted about his past as Doc which helps explain their bond.

The beach at Sag Harbor. Note the absence of huge homes and the placid bay waters.

Here’s where I encounter too many liberties. Sag Harbor is a former fishing village on the bay side of the South Fork,  opposite East Hampton on the ocean side. You can see for yourself in the nearby photos that White took more than a bit of license in recreating the landscape.

These liberties would go unremarked upon by most people and yet it presented a real difficulty for me. And I’m not even going to talk about the Kentucky-style racing stable that is located, if I followed the plot, in what is one of the few remaining potato fields.

You’re probably wondering what any of this has to do with changing your mind about a character. My initial attraction to Doc Ford was the improbability of his dueling professions. Like all heroes I respond to, he follows a code.

In this book, however, he actively steps into the role that he’s been coming close to for some time now. Before the main story even gets going he is tying up a loose end by disposing of a problem from a previous book. Even though it is, in its own way, a principled action it’s enough outside his norm that I started to wonder what he’s really up to. Is he becoming Mr. Majestyk with a bunch of fish tanks and a fast skiff? 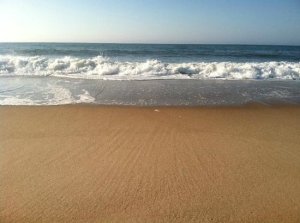 The beach at Montauk, a bit further east and on the ocean side. This is the surf the book places behind a Sag Harbor waterfront home. (You can find surf like it behind the Maidstone Club.)

The main story presents a lot less room for puzzling over morals. It’s the story of a political kidnapping that goes wrong, resulting in the capture and imprisonment of a teenager. The background is a complicated tangle of events and uncertain motives set in motion by shadowy players who, in the end, become known to us.

Just to keep it all interesting there’s a countdown clock working on the kid’s life and his captors are a pair of murderous Cubans. The elder of the two has a past that puts him on the wrong side during the Cold War where he did his best to carry on the work of Dr. Mengele.  His sidekick is, to use an impolite but apt term, a retarded Samson.

In many ways this book belongs to Tomlinson. He’s usually a presence and serves to bring some stoner humour into otherwise hard-bitten tales–Doc Ford is never going to rank with Spenser or John Corey as a wise cracker.  It must be that spy background. As I wrote this paragraph I couldn’t help thinking of Jack Ryan, another spook with a code and little room for laughter.

I’ve seen this in Sanibel (well, Captiva) and Delaware, too. Never back home.

In fact, Tomlinson’s family history and Long Island roots are crucial to the unfolding of the tale. There’s a good chunk of this book set in  the wintry Northeast but the climax comes, as if by decree, back in Southwest Florida. It’s the Twain rule. (I will say, having some familiarity with the area, that White’s knowledge lets him make use of the locale without the tortures he inflicted on Sag Harbor.)

There’s a new character or two here, too, although I get the sense some have shown up before in books I’ve yet to read. And there are the sorts of improbabilities that abound in a Doc Ford tale. I think those are his low-key joke and I kind of want to see how he keeps it all going.  Sanibel is not such a big island that you can keep adding population forever.

Sometimes I read, like most people do, just for escape. This romp through my home ground, and White’s, is a fine entertainment indeed.

2 thoughts on “That Vigilante Man”